Employees at the Department of Homeland Security (DHS) counter terrorism, provide airplane and border security, and respond to emergencies (among other critical functions).

Federal surveys have consistently found that DHS employees are less satisfied with their jobs than the average federal worker. In response, DHS has been working to increase employee morale—e.g., by improving access to benefits and resources.

We testified that DHS has made progress in improving employee morale between 2015 and 2019. However, it still ranks the lowest among large federal agencies for employee satisfaction and engagement. 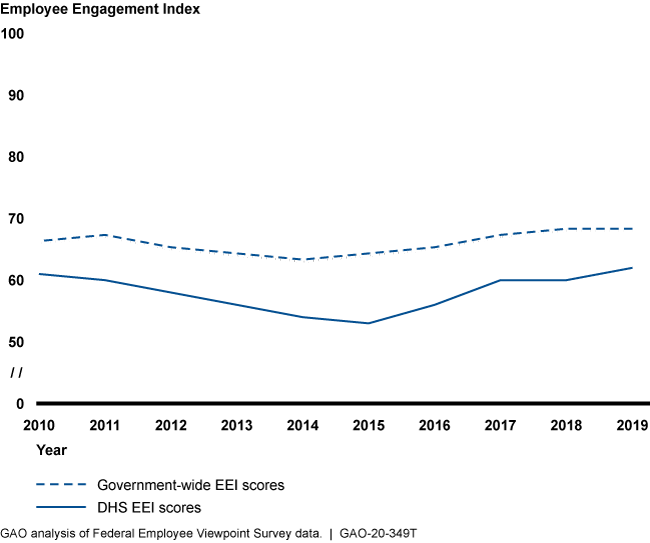 The Department of Homeland Security (DHS) has undertaken initiatives to strengthen employee engagement through efforts at its component agencies and across the department. For example, at the headquarters level, DHS has instituted initiatives to improve awareness and access to support programs, benefits, and resources for DHS employees and their families.

In 2019, DHS improved its employee engagement scores, as measured by the Office of Personnel Management's Federal Employee Viewpoint Survey (FEVS)—a tool that measures employees' perceptions of whether and to what extent conditions characterizing successful organizations are present in their agency. As shown below, DHS increased its scores on a measure of employee engagement, the Employee Engagement Index (EEI), across 4 consecutive years, from a low of 53 percent in 2015 to 62 percent in 2019. 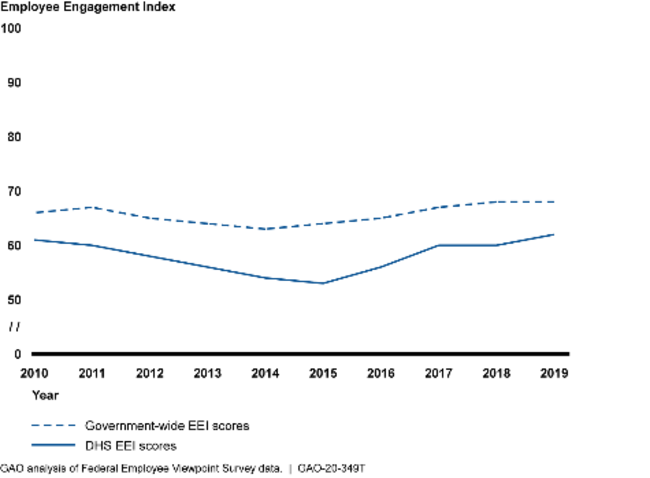 While DHS has made progress in improving its scores, in 2019 it remained six points below the government-wide average for the EEI. For several years, DHS and its component agencies have identified root causes for their engagement scores including concerns about leadership accountability and understaffing, among others. This statement discusses nine recommendations related to DHS employee engagement and workforce planning. DHS implemented all but one of these recommendations—to review and correct its coding of cybersecurity positions and assess the accuracy of position descriptions. Finally, filling vacancies could help ensure continued leadership commitment across DHS's mission areas.

DHS is the third-largest cabinet-level department in the federal government, employing more than 240,000 staff in a broad range of jobs, including countering terrorism and homeland security threats, providing aviation and border security, emergency response, cybersecurity, and critical infrastructure protection. Since it began operations in 2003, DHS has faced challenges with low employee morale and engagement. Federal surveys have consistently found that DHS employees are less satisfied with their jobs compared to the average federal employee. For example, DHS's scores on the FEVS and the Partnership for Public Service's rankings of the Best Places to Work in the Federal Government® are consistently among the lowest for similarly-sized federal agencies.

This statement addresses our past and ongoing work monitoring human capital management and employee morale at DHS and select work on employee engagement across the government. This statement is based on products GAO issued from September 2012 through May 2019 as well as GAO's ongoing efforts to monitor employee morale at DHS as part of GAO's high-risk work. For these products, GAO analyzed DHS strategies and other documents related to DHS's efforts to address its high-risk areas, interviewed DHS officials, conducted analyses of FEVS data, and interviewed officials from other federal agencies that achieved high employee engagement scores, among other things.

GAO provided a copy of new information in this statement to DHS for review. DHS confirmed the accuracy of this information.