After the Sept. 11 attacks, insurers generally stopped covering terrorism risk. Through the Terrorism Risk Insurance Act, Congress sought to ensure available, affordable commercial insurance for this risk. Under this program, the government and insurers share losses.

Since 2003, the share of any losses insurers would pay has increased and the federal government’s share (and related fiscal risk) has decreased.

Some insurers may not fully understand program parameters, such as how the Treasury Department determines when government participation starts and when its payment limit has been reached. We recommended Treasury clarify this for insurers. 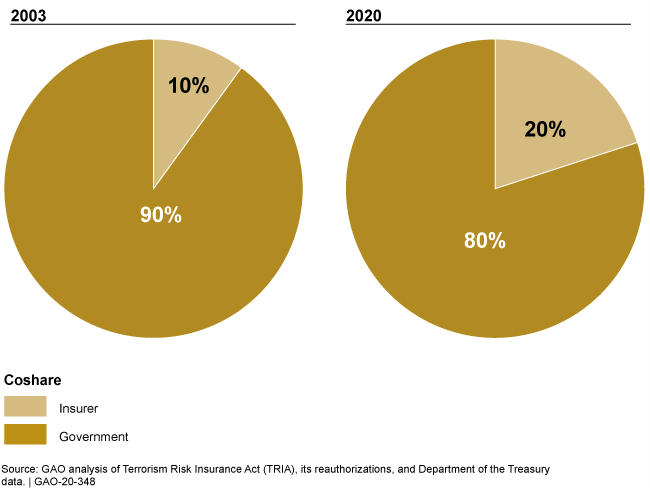 Terrorism Risk Insurance Act (TRIA) reauthorizations through 2015 have decreased federal fiscal exposure, and insurers have adjusted by managing their increased risk. Changes in the TRIA program that the Department of the Treasury (Treasury) administers—particularly incremental changes since 2015—reduced the government's explicit fiscal exposure from a certified act of terrorism (see figure). For example, by increasing the program trigger—minimum amount of industry-insured losses needed to activate the program—Congress potentially reduced the number of events that qualify for federal payments. As explicit federal fiscal exposure has decreased, insurer exposure has increased. Nevertheless, the market for terrorism risk has remained stable. However, some insurers are uncertain how Treasury defines insured losses for the purposes of calculating whether the program's $200 million trigger or $100 billion cap have been reached. For example, some insurers interpreted insured losses to include the portion of losses policyholders retain, which was different from Treasury's interpretation. Differences in interpretations could lead to disputes between insurers and Treasury following a terrorist event. One purpose of TRIA is to stabilize the market following a terrorist event. Communicating how it would calculate losses toward these program amounts could help Treasury alleviate uncertainty in the insurance market following a terrorist event.

Illustrative Example of Explicit Federal Fiscal Exposure from a Terrorist Event with $100 Billion in Insured Losses, 2015 and 2020

Note: This analysis assumes that insurers that sustained losses in each terrorist event had earned 25 percent of all direct-earned premiums in eligible insurance lines.

The government also has implicit fiscal exposure following a terrorist event, arising from expectations based on current policy or past practices that it may provide assistance, even when it is not legally required to do so. Although the government may not act on these expectations, the government's implicit exposure might become explicit if it

chooses not to recoup the full federal share of losses from property/casualty policies, as allowed under TRIA, to prevent further stresses on the insurance market after a major terrorist event;

assists companies with uninsured or underinsured losses after a terrorist event or when losses exceed the program cap;

covers uninsured losses from a nuclear, biological, chemical, or radiological terrorism event; or

assists insurers with losses that did not meet TRIA's trigger for loss sharing, or that were incurred in excluded lines of coverage, such as life and health insurance.

Congress enacted TRIA to help ensure the availability and affordability of commercial property/casualty insurance for terrorism risk and to address potential effects on the economy in the absence of such coverage. Under the TRIA program, which is set to expire December 31, 2027, the government and insurers share losses following a certified act of terrorism. TRIA creates explicit fiscal exposure because the government is legally required to make payments to insurers after such an event, but there also may be some implicit exposure from an expectation of federal spending. To date, Treasury has not certified any acts of terrorism.

To conduct this work, GAO reviewed the TRIA statute and related studies, analyzed Treasury data, and interviewed a nongeneralizable sample of insurers of different sizes providing various types of insurance.

GAO recommends that Treasury communicate how it would calculate losses, as they relate to policyholder retention amounts, in determining the TRIA program trigger and cap. Treasury agreed with the recommendation.