Over 130 people in the U.S. die each day from an opioid overdose. Some of these overdoses involve illicit opioids that enter the country via international mail.

Starting January 1, 2020, there is a $1 fee on items sent to the U.S. via international Express Mail Service. The fee helps fund inspection of that mail for illicit opioids and other prohibited goods.

Should there be more fees on other types of inbound mail? Customs and Border Protection said such fees could help fund its mail inspection, but are unlikely to deter people from mailing illicit opioids. USPS said more fees could make it too expensive to mail some goods and cut mail volume. 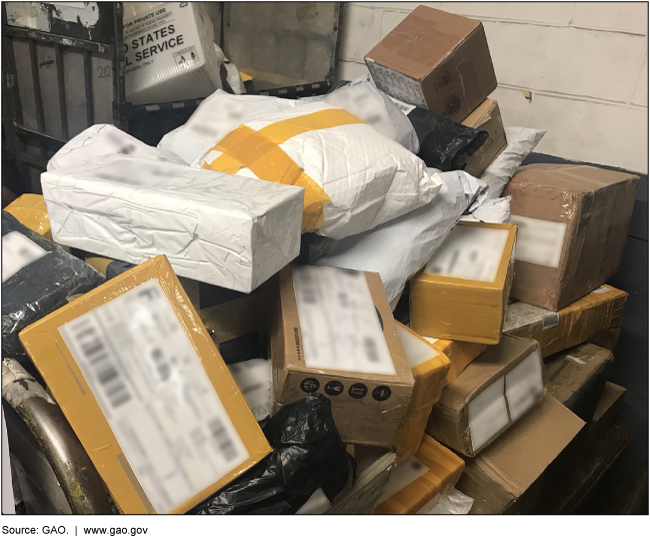 The Synthetics Trafficking and Overdose Prevention Act of 2018 (STOP Act of 2018) included several measures to support federal efforts to detect illicit opioids that enter the United States via inbound international mail. For example, the act required that the U.S. Postal Service (USPS) assess a $1 customs fee beginning in January 2020 on each item mailed to the United States via Express Mail Service (EMS). In general, the purpose of customs fees is to help fund customs processing-related efforts, such as U.S. Customs and Border Protection's (CBP) inspection of international mail for illicit opioids and other prohibited items. The STOP Act of 2018 included a provision for GAO to examine issues related to the possible assessment of an additional customs fee on other inbound international mail.

Federal stakeholders with a key role in inbound international mail—USPS, CBP, and the U.S. Department of State (State)—that GAO interviewed identified several considerations for assessing an additional customs fee on international mail. Fundamentally, stakeholders pointed out that the effectiveness and any unintended consequences of a new fee would depend on its design, such as the fee's type, applicability, and collection. For example, CBP officials said that some senders might avoid paying the new EMS fee by sending goods via similar types of international mail not subject to the new fee. USPS officials said that any new fee could negatively affect mail volume by making mail more expensive to use. A new customs fee would require legislative action.

The STOP Act of 2018 also included a provision that GAO examine whether CBP's opioid-detection efforts might be improved by certain role changes—i.e., by requiring USPS to serve as the consignee and by designating a customs broker as an importer of record for inbound international mail. CBP officials and selected industry stakeholders knowledgeable of these roles told us that these changes would not improve CBP's opioid-detection efforts. Specifically, CBP officials said that requiring USPS to serve as the consignee (i.e., recipient) could make it difficult to identify details about the actual recipient. Representatives of an association for customs brokers (individuals who help shippers meet federal import and export requirements) said that while customs brokers can help to more efficiently clear shipments through customs processing, they have no role in opioid-detection and are generally hired to clear shipments with high values or complex entry requirements. USPS officials similarly questioned the value of using customs brokers for international mail, which they said generally includes lower-value and non-complex shipments. Representatives of the association for customs brokers added that customs brokers generally do not serve as importers of record due to liabilities associated with doing so, such as liability for any penalties or fees associated with the shipments, and believed that customs brokers would oppose any new requirement to serve as importers of record for inbound international mail.

According to the National Institute on Drug Abuse, more than 130 people in the United States die daily from an opioid overdose. In recent years, Congress and the Administration have increasingly focused on illicit opioids arriving via international mail.