Holding room at a CBP port of entry 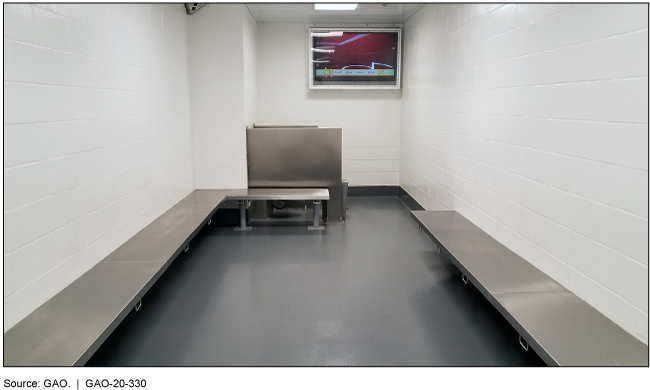 ICE has policies and detention standards that address a variety of topics regarding the care of pregnant women, such as pregnancy testing requirements, for which non-governmental organizations, professional associations, and federal agencies have issued recommended guidance. However, some facility types—which vary based on who owns, operates, and provides medical care at the facility—did not address all these pregnancy-related topics in their policies and standards, such as prenatal vitamins, as of December 2019. ICE has plans to address the gaps GAO identified in these facility types, including updating some of its policies and detention standards in February 2020. In regards to CBP, its facilities are designed for holding individuals for no more than 72 hours, and therefore are not equipped to provide long-term care. Nonetheless, CBP has some policies and standards regarding pregnant women for its short-term facilities, including those related to nutrition and the circumstances in which restraints could be used.

GAO's analyses of inspections and complaint mechanisms offered the following insights into the care provided to pregnant women:

In December 2017, the Department of Homeland Security (DHS) updated its policy on pregnant women, removing language that stated that pregnant women would generally not be detained except in extraordinary circumstances or as mandated by law. Within DHS, CBP temporarily holds individuals in its facilities and processes them for further action, such as release or transfer to ICE. ICE manages the nation's immigration detention system. ICE utilizes various facility types to detain individuals, such as those owned and operated by ICE and contract facilities. GAO was asked to review issues related to the care of pregnant women in DHS facilities.

GAO analyzed available DHS data and documents from calendar years 2015 through 2019, including detention data, inspection reports and data, and complaints; reviewed policies related to the care of pregnant women; and interviewed agency officials and three national non-governmental organizations. GAO also interviewed a non-generalizable sample of 14 pregnant women detained or released by DHS and five non-governmental organizations in four field locations that had the greatest number of detentions of pregnant women, among other things.