In 2018, the administration released its government-wide reform plan aimed at making the federal government more efficient and effective. The Office of Management and Budget oversees the proposals with support from other lead agencies.

We reviewed 5 reform proposals, including addressing the cybersecurity workforce shortage and establishing a Government Effectiveness Advanced Research Center. Planning and implementation have progressed since 2018, but some reform proposals are still missing key details. 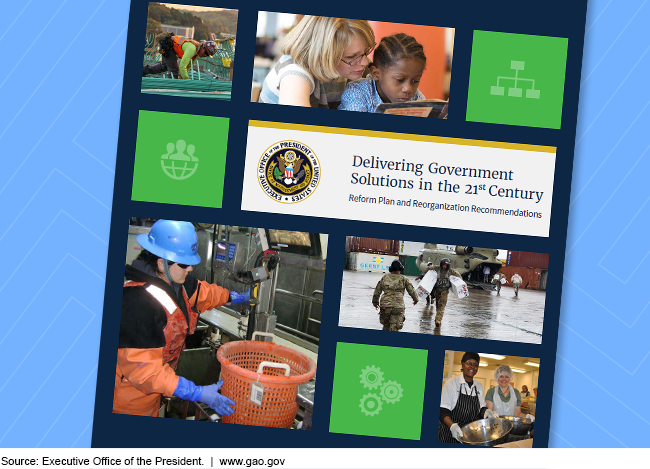 In working to implement three selected government-wide reforms that GAO reviewed, the Office of Management and Budget (OMB) and lead agencies followed some, but not all, of the key practices associated with effective reforms. Following key practices, such as those reflected in the questions below, would better position OMB and lead agencies to effectively implement such major change initiatives and achieve their intended objectives.

Moving background investigations from the Office of Personnel Management (OPM) to the Department of Defense (DOD) : As required, the transfer of background investigations took place by September 30, 2019. OMB, OPM, and DOD generally addressed most key reform practices in this transfer, including involving employees and stakeholders, establishing an implementation team, and developing implementation plans. With the transfer complete, DOD officials told GAO they are shifting focus toward addressing GAO's high-risk area on the government-wide personnel security clearance process.

Solving the cybersecurity workforce shortage : OMB and the Department of Homeland Security (DHS) partially addressed most leading practices through their efforts to implement several projects, such as reskilling employees to fill vacant cybersecurity positions, and streamlining hiring processes. However, GAO found that OMB and DHS have not established a dedicated implementation team, or a government-wide implementation plan, among other practices. Without these practices in place, OMB and DHS may not be able to monitor implementation activities and determine whether progress is being made toward solving the cybersecurity workforce shortage.

Establishing the Government Effectiveness Advanced Research (GEAR) Center : According to OMB, the GEAR Center will bring together researchers from private and public sectors to inform and develop ways to improve government services and operations. OMB is working toward establishing the GEAR Center by collecting input from the public, academia, and industry for how the Center could be structured and ideas for possible research projects. However, OMB has not yet developed an implementation plan with key milestones and deliverables to track its progress. Developing and communicating an implementation plan will help OMB track the GEAR Center's progress and communicate its results.

In June 2018, the administration released its government-wide reform plan, which included 32 proposals aimed at achieving management improvements and organizational efficiencies, among other things. OMB has a central role in overseeing these reform proposals, with support from various lead agencies. In July 2018, GAO reported on key questions to consider when developing and implementing reforms.

GAO was asked to examine reform implementation. This report discusses three selected reforms that the administration prioritized: (1) moving background investigations from OPM to DOD, (2) solving the cybersecurity workforce shortage, and (3) establishing the GEAR Center. For each selected reform, GAO determined the extent to which OMB and the lead agencies addressed key practices for effectively implementing reforms, among other issues.

GAO is making 7 recommendations to OMB to follow certain key practices to help solve the cybersecurity workforce shortage and to establish the GEAR Center. OMB did not comment on the report.