The number of people U.S. Customs and Border Protection (CBP) apprehended on the southwest border more than doubled to 850,000 from FY 2018 to 2019.

CBP hired a contractor to put up a temporary facility in Tornillo, Texas, capable of holding 2,500. CBP paid the contractor $66 million to provide meals, guards, and other services for 5 months.

While open, the facility held no more than 68 detainees on any given day. CBP spent $5.3 million on unnecessary food, and used significant personnel resources (contractors, CBP staff, and personnel from other agencies) in the facility.

We recommended that CBP review this acquisition for lessons learned. 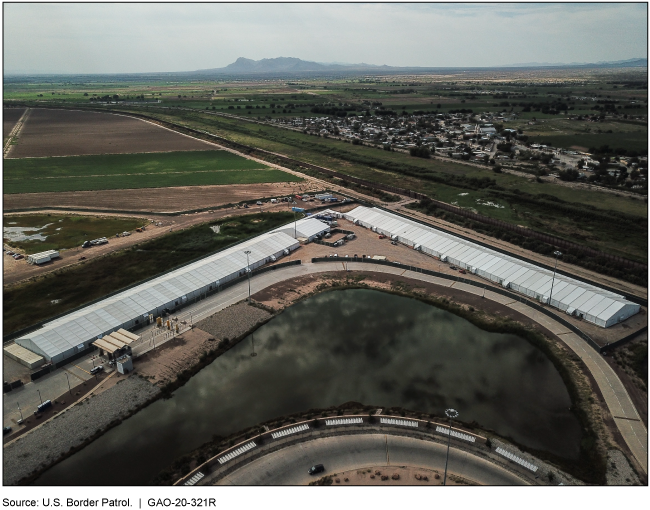 U.S. Customs and Border Protection (CBP) opened a temporary facility in Tornillo, Texas in August 2019. CBP exercised the first option to extend operations at the facility on November 4, 2019 and declined to exercise the second option, resulting in the facility's closure on January 3, 2020.Throughout the facility's operation, CBP held far fewer apprehended individuals in the facility than its capacity and spent money on food services that were not needed. More specifically, from August 4, 2019 through January 3, 2020, CBP held no more than 68 adults in the Tornillo facility on any given day, far below the 2,500-person capacity. GAO's analysis of CBP data showed that, on average, there were 30 adults held in custody at the Tornillo facility per day during this period. Further, CBP spent about $5.3 million for food services it did not need during the initial period of performance (August 4, 2019 through November 3, 2019) and allocated significant personnel resources to the facility, such as Border Patrol agents and Texas National Guard personnel.

In light of the low number of detainees held, and the significant costs and resources allocated to the facility, GAO identified concerns about the management and use of the facility. These concerns included (1) the initial terms and conditions negotiated by CBP, which did not provide flexibility to adjust pricing when the number of detainees was less than expected, and (2) the lack of input and information sharing among CBP components regarding the need for and use of the facility. Initially, CBP paid the contractor a fixed price for food services regardless of the number of detainees in the facility, per the terms of the delivery order. In November 2019, when exercising the first option to extend operations by two months, CBP moved to a tiered pricing approach, which reduced the cost of food services to better reflect the actual number of detainees. Specifically, during the first option period, CBP paid $74,207 for 2 months of detainee meals and snacks (with tiered pricing), whereas it paid $3.6 million for 2 months of detainee meals and snacks during the initial period of performance (without tiered pricing). Had CBP negotiated tiered-pricing when initially placing the order, CBP could have positioned itself to better handle varying levels of detainees in a more cost-effective manner. Additionally, the Border Patrol officials who operated the facility were not consulted prior and did not have input into its requirements. Once the facility was operational, gaps in communication between stakeholders about the numbers of detainees at the facility limited CBP's ability to consider options to modify the order in a more timely fashion.

In November 2019, CBP decided not to exercise another option for the facility and, as of January 3, 2020, the facility has been closed. CBP officials stated that they made this decision because of the low numbers of individuals detained and because a permanent holding facility would be opening nearby in 2020. Although CBP closed the facility, according to key practices for program and project management, it is important to identify and apply lessons learned from programs, projects, and missions to limit the chance of recurrence of previous failures or difficulties. Given the issues and concerns with the Tornillo facility, assessing the acquisition and use of the facility to identify lessons learned, such as how acquisition approaches could be improved to be more cost-effective and incorporate better stakeholder input and information sharing, could help provide CBP with insights to inform future acquisitions.

In fall 2018, CBP began experiencing a significant increase in the number of individuals apprehended at or between U.S. ports of entry along the southwest border, which resulted in overcrowded and difficult humanitarian conditions in CBP facilities. To help address this issue, in July 2019, CBP placed a delivery order with a 3-month initial period of performance and five 2-month options for building, operating, and maintaining a temporary facility in Tornillo, Texas with a capacity to hold 2,500 detainees. The price for the initial 3-month period of performance was approximately $47 million, with each option priced at approximately $19 million.

This correspondence examines how CBP utilized and managed the Tornillo facility. GAO reviewed acquisition regulations, agency guidance, and procurement documentation related to the facility, as well as data on the number of individuals held at the facility, personnel resources at the facility, and cost information. GAO also reviewed prior work on evaluating results and identifying lessons learned. Further, GAO interviewed agency officials associated with the acquisition of the facility and its operations, as well as the contractor responsible for performing the delivery order.

CBP should conduct an assessment of the acquisition and use of the Tornillo facility and identify any lessons learned. DHS concurred with this recommendation.