Weaknesses in the Department of Defense’s oversight of the support it has provided to foreign partners have resulted in thousands of overdue reimbursements.

Through its Acquisition and Cross-Servicing Agreements, DOD provides foreign partners with reimbursable support such as meals, aerial refueling, munitions (for example some used in Saudi-led Coalition activities in Yemen), and more. However, DOD has not consistently maintained quality data or requested reimbursement for thousands of these transactions, which it values at more than $1 billion.

We made 7 recommendations to improve DOD’s oversight of these transactions. 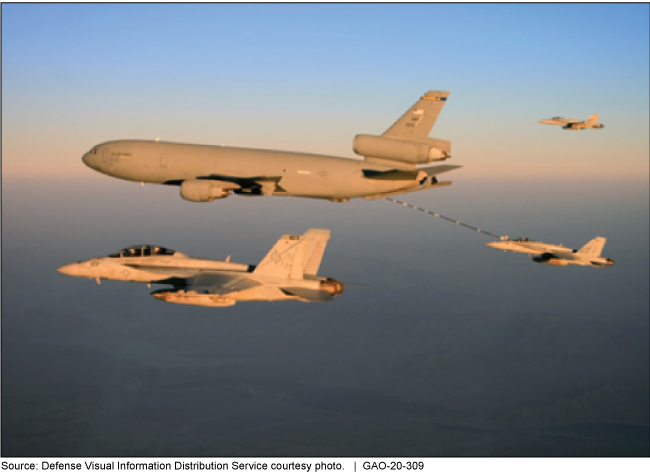 While generally providing required information to Congress, poor recordkeeping by the Department of Defense (DOD) and late notifications by the Department of State (State) have limited the accuracy and timeliness of information provided to Congress on acquisition and cross-servicing agreements (ACSA). DOD and State have Congressional notification requirements pertaining to ACSAs—agreements through which DOD exchanges logistic support, supplies, and services with foreign partners in return for cash or in-kind reimbursement. Documents indicate that DOD provided notice to Congress before designating 78 of 104 countries eligible for an ACSA. However, DOD did not have records for the remaining 26, in part because it lacks documented recordkeeping procedures. While State generally notified Congress about ACSAs' entry into force, it transmitted 41 percent of them after the statutory deadline, largely because DOD did not provide required information to State. These gaps and issues have reduced the accuracy and timeliness of information provided to Congress about ACSAs.

Reimbursement Status for ACSA Orders in DOD's System of Record from October 2013 through March 2018, by Number of Orders

Note: These estimates are based on a generalizable sample of orders in which the United States provided support to foreign partners; have a margin of error of up to plus or minus 5.1 percentage points at the 95-percent confidence level; and represent the percentage of the number of orders, not the dollar value of orders.

According to DOD, from fiscal years 2014 through 2019, it used ACSAs to provide billions of dollars of logistic support, supplies, and services to more than 100 partner countries. For example, this support included fuel and ammunition to assist international exercises and coalition operations, among other efforts.

Senate Report 115-262 included a provision for GAO to review ACSA management. This report examines the extent to which (1) agencies have provided information to Congress about ACSAs, and (2) DOD has tracked and received reimbursement for ACSA orders. GAO conducted content analysis of DOD and State ACSA documents, and analyzed a generalizable sample of ACSA orders authorized from October 2013 through March 2018 and recorded in DOD's system of record for ACSA orders. An ACSA order, also referred to as a transaction, documents an exchange of support between the United States and a foreign partner. In addition, GAO interviewed agency officials and conducted fieldwork at Shaw Air Force Base in Sumter, South Carolina.