Their three largest funding sources are:

However, airport officials said that these combined funds may not be enough to cover the costs of their planned infrastructure projects. These projects are expected to cost an average of $22 billion annually between fiscal years 2019-2023. 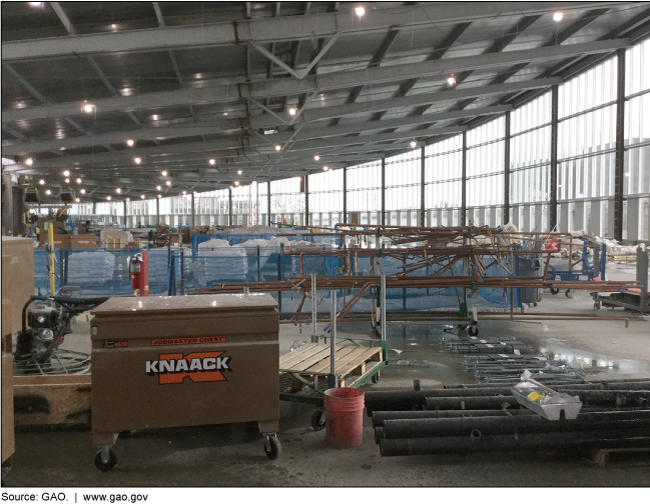 From fiscal years 2013 through 2017, U.S. airports received an average of over $14 billion annually for infrastructure projects. The three largest funding sources are below:

In addition to these sources, some airports obtained financing by issuing bonds, secured by airport revenue or PFCs. According to Federal Aviation Administration (FAA) data, larger airports were able to generate more bond proceeds than smaller airports in part because larger airports are more likely to have a greater, more certain revenue stream to repay debt.

Airports' planned infrastructure costs for fiscal years 2019 through 2023 are estimated to average $22 billion annually (in 2017 dollars)—a 19 percent increase over prior estimates for fiscal years 2017 through 2021. These costs are expected to increase in part because airports are planning to invest in more terminal projects. For example, cost estimates for AIP-eligible terminal projects increased about 51 percent when compared to FAA's prior 5-year estimate. FAA and airport association representatives stated that terminal projects can be more expensive than other projects because of the scale of the improvements, which can include renovating terminals to repair aging facilities and accommodate larger aircraft and growth in passengers.

U.S. airports are important contributors to the U.S. economy, providing mobility for people and goods, both domestically and internationally. About 3,300 airports in the United States are part of the national airport system and eligible to receive federal AIP grants to fund infrastructure projects. To help fund these projects, certain categories of airports are also authorized by federal law to collect PFCs, which passengers pay when buying tickets.

GAO analyzed airport-funding data for AIP grants, PFCs, airport-generated revenue, and other sources for fiscal years 2013–2017—the most recent years for which data were available—and FAA's and Airports Council – North America's cost estimates of airports' planned infrastructure projects for fiscal years 2019–2023. GAO also interviewed FAA officials; representatives from airline and airport associations, and bond-rating agencies; officials from 19 selected airports representing airports of different sizes and with the highest planned development costs, among other things; and representatives from eight selected airlines, selected based on factors such as passenger traffic.