FEMA uses several scenarios—including a pandemic influenza similar to COVID-19—to allow states and territories to assess their own emergency response and recovery capabilities (e.g., how quickly they can restore electricity, or how much emergency housing they can provide).

States and territories have a good handle on their strengths and weaknesses, but FEMA hasn’t used the information to determine the full scope of national needs. FEMA also hasn’t determined what resources the federal government would need to close the gaps—many of which are longstanding.

We recommended taking these steps and more to strengthen national preparedness. 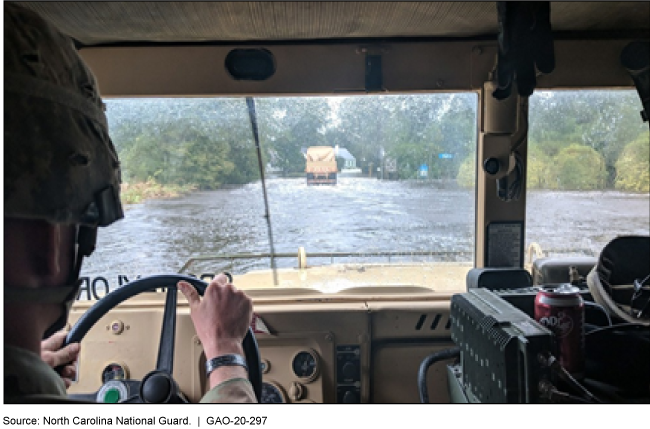 The Federal Emergency Management Agency's (FEMA) National Preparedness System and associated grants have helped build some emergency management capabilities, but gaps remain. Capabilities fall in five mission areas: (1) prevention—preventing imminent acts of terrorism, (2) protection—protecting citizens and assets, (3) mitigation—mitigating the loss of life and property, (4) response—responding quickly to save lives, and (5) recovery—timely restoration of infrastructure and housing, among other things. From fiscal years 2013 through 2018, jurisdictions directed almost 90 percent of FEMA preparedness grants ($7.3 of $8.3 billion) to capabilities in the crosscutting (i.e., benefit all five mission areas), response, and prevention areas (figure below). Jurisdictions reported a higher level of preparedness in these areas compared to capabilities in the other mission areas—recovery, mitigation, and protection. Jurisdictions have consistently rated select capabilities in these three mission areas—such as disaster housing and cybersecurity—in the lowest category since 2013. FEMA does not limit jurisdictions' use of preparedness grants for select capabilities, but it has encouraged jurisdictions to address the known gaps.

FEMA after-action reports have identified areas for improvement and lessons learned following disasters, but has completed after-action reviews for only 29 percent of disasters from 2017 through 2019. FEMA lacks a formal mechanism to track corrective actions and does not have guidance on sharing after-action reports with key external stakeholders, as appropriate.

FEMA uses the National Preparedness System to help assess the nation's emergency management capabilities in preparing for disasters and, in part, to help prioritize federal preparedness grants it provides to state and local jurisdictions. Since 2002, FEMA has provided over $52 billion in such grants intended to enhance preparedness capabilities.

GAO is making four recommendations that FEMA (1) determine what steps are needed to address emergency management capability gaps, and communicate it to key stakeholders (2) prioritize completion of after-action reviews, 3) track corrective actions, and (4) develop guidance on sharing findings externally. The Department of Homeland Security concurred and FEMA is taking actions in response.

Is FEMA Ready to Respond to Emergencies?