FEMA has begun to modernize alerting capabilities with help from the FCC. However, some state and local public safety agencies cannot access the system and others have low confidence in using it. Also, without goals and performance measures for improvements made to wireless emergency alerts, the FCC can’t ensure the system is working as intended.

We are making 3 recommendations to address these concerns. 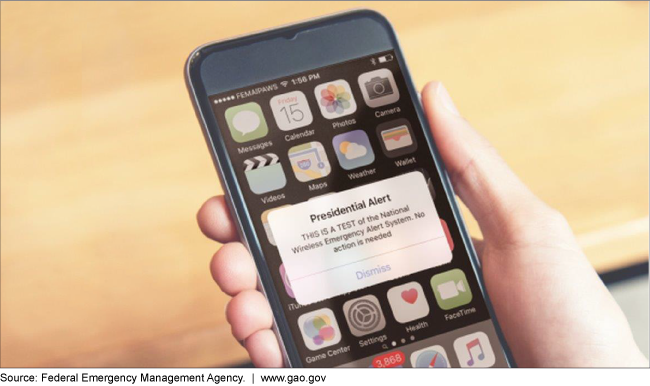 Cell phone showing a test presidential alert on the screen

Use of the Integrated Public Alert and Warning System (IPAWS) has increased since its launch in 2012. IPAWS enables authorized federal, state, territorial, tribal, and local alerting authorities to send a Wireless Emergency Alert (WEA) to mobile devices, such as cell phones and an Emergency Alert System (EAS) alert to media platforms, such as radios and television. The Federal Emergency Management Agency (FEMA) operates IPAWS and the Federal Communications Commission (FCC) establishes rules for telecommunications providers to deliver WEA and EAS alerts. A public safety agency must submit an application and receive approval from FEMA to become an IPAWS alerting authority. In September 2019, more than 1,400 alerting authorities had access to IPAWS, up from fewer than 100 authorities in 2013. All states have at least one state alerting authority, but gaps in local authority access remain (see figure) that could limit the timeliness of alerts as emergencies occur at the local level. GAO found 430 pending IPAWS applications as of September 2019, some of which dated back to 2012. FEMA has not established procedures to prioritize and follow up with applicants and FEMA officials acknowledged that doing so would be beneficial.

FEMA and FCC have taken steps to modernize IPAWS and improve alerting. For example, FEMA has made system upgrades and FCC has made various WEA improvements, such as requiring wireless phone carriers to provide more precise geographic targeting of alerts. Prior to these improvements, officials from many alerting authorities said the inability to geographically target alerts with accuracy made the officials reluctant to send WEA messages. FCC intends to partner with certain localities to test geographic targeting and, according to FCC officials, plans to use other tests to learn about how the improvements perform during emergencies. However, FCC has not developed goals and performance measures for these efforts. Doing so would help FCC more clearly assess whether the WEA improvements are working as intended. Furthermore, having specific performance information could increase alerting authorities' confidence in and use of IPAWS.

Public alerts and warnings are critical to protect lives and provide information during emergencies, such as wildfires and floods. The IPAWS Modernization Act, enacted in 2016, required FEMA, in consultation and coordination with FCC, to enhance and test the capabilities of IPAWS and increase its adoption among state and local public safety agencies.

GAO was asked to review the federal response to recent natural disasters. This report examines, among other things: (1) trends in the use of IPAWS and (2) actions that FEMA and FCC have taken to modernize IPAWS and increase its adoption.

GAO is making three recommendations, including that FEMA establish procedures to prioritize and address pending IPAWS applications and that FCC develop goals and performance measures to monitor the WEA improvements. FEMA concurred with GAO's recommendations. FCC stated it was taking steps to gather data to inform the development of metrics as GAO recommended.