Private-sector developers and property management companies build, renovate, maintain, and repair about 99% of family housing at military bases in the United States.

However, with reports of hazards like mold, lead-based paint, and pest infestations, there are concerns about how well DOD monitors the condition of privatized military housing.

We testified about our preliminary observations from ongoing work in this area. Specifically, military departments are increasingly monitoring privatized housing conditions at their respective bases, but don’t have reliable or meaningful data or metrics that adequately reflect the condition of housing. 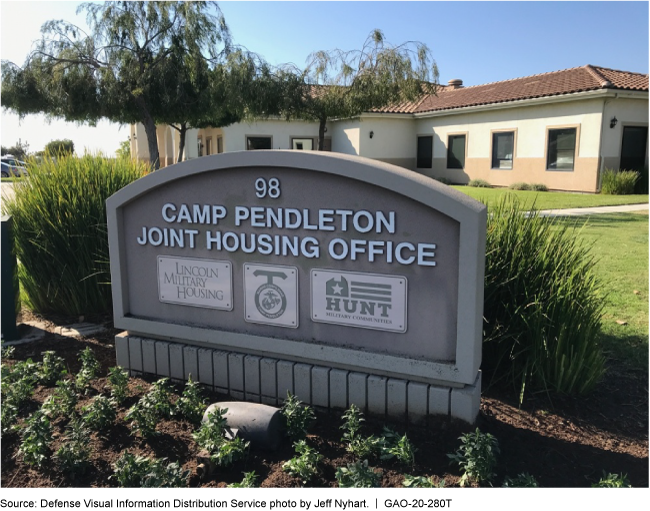 Each military department conducts a range of oversight activities—some more extensive than others—for its privatized housing projects, but these efforts have been limited in key areas. Specifically, based on GAO's ongoing work:

Military housing offices located at each installation are available to provide resources to servicemembers experiencing challenges with their privatized housing, but GAO's ongoing work showed these offices have not always effectively communicated this role to residents. For example, residents in GAO's focus groups noted confusion over the roles and responsibilities of these offices, and military housing officials have found that residents could not readily differentiate between military and private housing officials.

DOD, working with the private partners, has made progress in developing and implementing a series of initiatives. However, both DOD and private partner officials have noted several challenges that could affect implementation, including limitations to DOD's legal authority to unilaterally make changes to the terms of the projects and limited resources to implement increased oversight.

In 1996, Congress enacted the Military Housing Privatization Initiative in response to DOD concerns about inadequate and poor quality housing for servicemembers. Today, private partners are responsible for the ownership, construction, renovation, maintenance, and repair of about 99 percent of housing units on military bases in the continental United States.

DOD's policy requires that the department ensure eligible personnel and their families have access to affordable, quality housing facilities. The Office of the Secretary of Defense is responsible for providing guidance and general procedures related to military housing privatization. The military departments are responsible for executing and managing privatized housing projects.