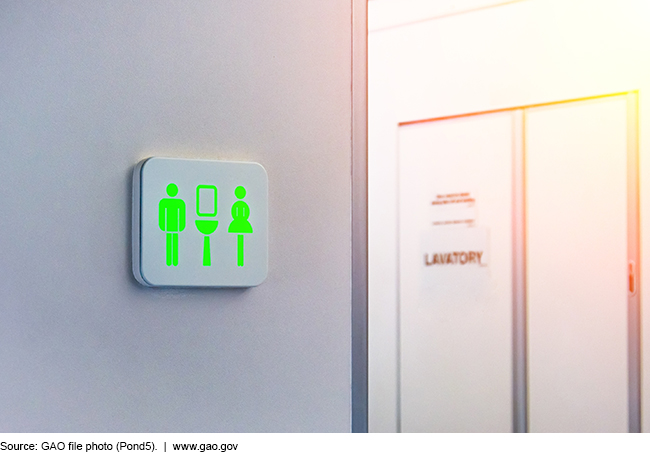 Outside of a restroom door on an airplane

Aircraft manufacturers offer lavatories that carriers can provide and that are designed to accommodate users of onboard wheelchairs, but carriers do not choose to acquire this option for their single-aisle aircraft. We found designs for lavatories that enable a passenger in an onboard wheelchair to use them, to varying degrees. In recent years, both Airbus and Boeing—makers of single-aisle aircraft—began offering similarly designed lavatories to provide greater access for these passengers. For example, one design consists of two adjacent lavatories located in the rear galley area with a connecting retractable wall to allow for a wheelchair-bound passenger to enter one lavatory and transfer or be transferred to the toilet in the other lavatory. Another design is a single lavatory large enough to accommodate a passenger using an onboard wheelchair. Four of the eight U.S. carriers—and only one of the four with the largest fleets—GAO interviewed have Airbus aircraft with an adjacent lavatory design (Space Flex version 1) or the single lavatory design found on the A220 aircraft, constituting about 4.5 percent of the carriers' combined single-aisle fleet (see figure). None of the eight U.S. carriers have purchased a similar lavatory for their Boeing's single-aisle aircraft. Carrier officials told GAO that they consider many factors when ordering lavatories, including financial and service tradeoffs such as the potential to lose seating spaces, or reduced food and beverage service for passengers.

Lavatories Designed for Persons with Reduced Mobility on Selected U.S. Carriers' Single-Aisle Aircraft, as of November 2019

While the Department of Transportation (DOT) receives few complaints on lavatory inaccessibility, consumer groups told GAO that the lack of an accessible lavatory on single-aisle aircraft presents challenges for persons with reduced mobility. For example, some passengers take precautionary measures to avoid the need to use the aircraft lavatory and others avoid flying altogether. Additionally, although some aircraft have wheelchair-accommodating lavatories, they are not well advertised to passengers, making it difficult for passengers to know whether their flight may have such a lavatory. To address such challenges and the findings of its 2016 advisory committee, DOT issued, on December 16, 2019, a notice of proposed rulemaking to require carriers to install accessibility features without changing the size of the lavatories. DOT also expressed intent to study the costs and benefits of enlarging single-aisle aircraft lavatories to enable use by passengers using the onboard wheelchair.

The Federal Aviation Administration (FAA) Reauthorization Act of 2018 included a provision that GAO examine the availability and designs of lavatories on commercial aircraft and the ability of passengers with disabilities to access them. This report describes (1) what is known about lavatory designs and accessibility for persons with reduced mobility and (2) the challenges wheelchair-bound passengers and others face while traveling on single-aisle aircraft without accessible or functional lavatories.