Noncitizens apprehended by DHS may be removed from the U.S. without an immigration hearing unless they express an intent to apply for asylum or a fear of persecution or torture.

Such “fear claims”—108,780 in FY2018—are referred to DHS’s immigration services agency, which determines whether there is a credible fear of persecution or torture, also known as a “positive determination.”

The agency screens family members individually but certain members can share positive determinations, or the agency may decide to keep them together. But, it doesn’t record complete data on all such results. We recommended it do so to better report on screenings. 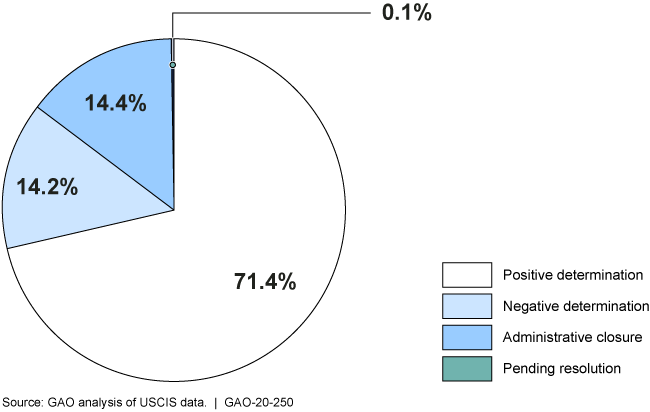 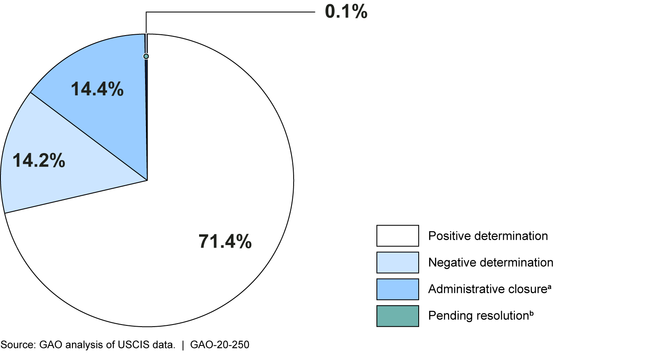 aAccording to USCIS, administrative closures occur when the asylum officer conducting the screening closes the case without a determination for reasons such as death, presence in state or federal custody, inability to communicate, or other reasons.

Further, consistent with regulation, USCIS policy is to include any dependents on a principal applicant's credible fear determination if the principal applicant receives a positive determination, resulting in the principal and any dependents being placed into full removal proceedings with an opportunity to apply for various forms of relief or protection, including asylum. For example, a parent as a principal applicant may receive a negative determination, but his or her child may receive a separate positive determination. In the interest of family unity, USCIS may use discretion to place both the parent and child into full removal proceedings rather than the parent being expeditiously ordered removed in accordance with the expedited removal process. However, USCIS's case management system does not allow officers to record whether an individual receives a determination on his or her case as a principal applicant, dependent, or in the interest of family unity. Without complete data on all such outcomes, USCIS is not well-positioned to report on the scope of either the agency's policy for family members who are treated as dependents, pursuant to regulation, or USCIS's use of discretion in the interest of family unity.

Individuals apprehended by DHS and placed into expedited immigration proceedings are to be removed from the country without a hearing in immigration court unless they express an intention to apply for asylum, or a fear of persecution, torture, or return to their country. Those with such “fear claims” are referred to USCIS for a credible fear screening. Individuals who have certain criminal convictions or who have a reinstated order of removal and claim fear are referred for a reasonable fear screening. Those with negative outcomes can request a review by EOIR's immigration judges. GAO was asked to review USCIS's and EOIR's processes for fear screenings.