Until the 1970s, mine operators could mine for valuable hardrock minerals—i.e., gold or copper—then abandon the land. On lands they oversee, federal agencies identified about 140,000 remnants of these hardrock mines, including unsecured tunnels and toxic waste piles. Hundreds of thousands more likely exist.

Remedies include sealing tunnels and treating contaminated water to address safety and environmental hazards. But this can come with a hefty price tag.

Most federal and state officials said they had trouble identifying and eliminating hazards at abandoned mines because doing so would cost millions and create potential liability issues. 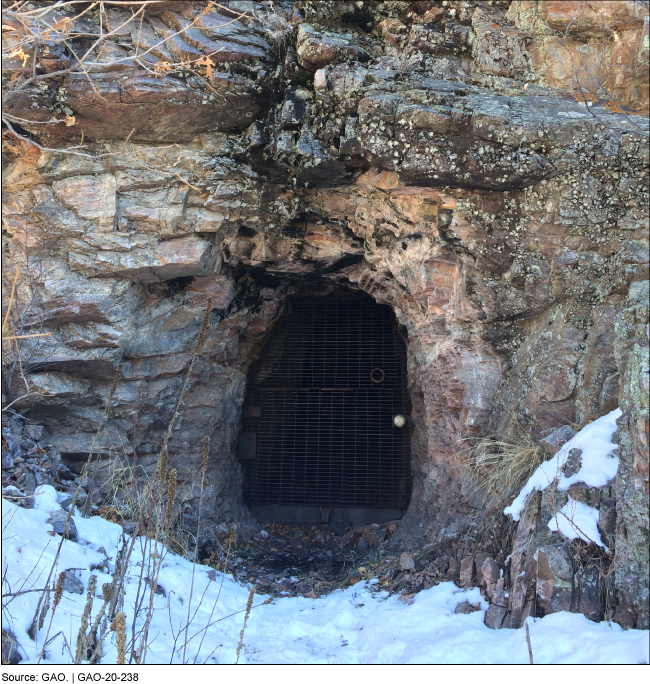 Entrance to a mine tunnel

The U.S. Department of Agriculture's Forest Service, the Department of the Interior's Bureau of Land Management (BLM) and National Park Service, and the Environmental Protection Agency (EPA) identified at least 140,000 abandoned hardrock mine features, such as a tunnel, on lands under their jurisdictions. Of these, about 67,000 pose or may pose physical safety hazards—danger of injury or death—and about 22,500 pose or may pose environmental hazards—risks to human health or wildlife from long-term exposure to harmful substances. Agency officials also estimated there could be more than 390,000 abandoned hardrock mine features on federal land they have not captured in their databases, and agencies are developing more comprehensive information about these mines.

Forest Service, BLM, National Park Service, EPA, and Interior's Office of Surface Mining Reclamation and Enforcement (OSMRE) spent, on average, about $287 million annually to address physical safety and environmental hazards at abandoned hardrock mines from fiscal years 2008 through 2017, for a total of about $2.9 billion (see figure). Of this total, the agencies spent about 88 percent ($2.5 billion) addressing environmental hazards, and about $1 billion was reimbursed by private parties, such as former mine owners. Federal officials also estimated that it would cost billions more to address these mines in the future.

Nearly all of the federal and state agency officials and stakeholders GAO interviewed cited availability of resources and legal liability concerns as factors that limit efforts to address hazards at abandoned hardrock mines. Federal and state officials said their backlog of work is greater than what can be done with available staff and budgets, but they have taken steps to collaborate to help leverage resources. State officials and stakeholders, such as conservation groups, said they want to help address environmental hazards that they did not cause at abandoned hardrock mines. However, they generally do not do so because they are concerned about becoming legally responsible for the entire cost of addressing contamination at an abandoned mine if they attempt partial cleanup. EPA officials said they are considering new ways to encourage volunteer participation, in addition to existing administrative tools.

The General Mining Act of 1872 allowed individuals to obtain exclusive rights to valuable hardrock mineral deposits on land belonging to the United States. Miners explored, mined, and processed valuable minerals, but many did not reclaim the land after their operations ended. Unsecured mine tunnels, toxic waste piles, and other hazards—known as mine features—are found at abandoned hardrock mines across federal and nonfederal lands. The Forest Service, BLM, National Park Service, EPA, and OSMRE—as well as state agencies—administer programs that identify and address hazardous features at abandoned hardrock mines. Addressing features could include, for example, sealing mine tunnels or treating contaminated water.

GAO obtained and summarized information from agency databases about the number of abandoned mines, features, and hazards as of 2019; summarized agency spending data from fiscal years 2008 through 2017, the most currently available; and interviewed federal and state agency officials and stakeholders, selected to provide diverse perspectives.