H-2B visas are intended to help employers fill certain jobs (i.e. landscaping, seafood processing) when no U.S. workers are available. The number of visas is capped and they're generally first come, first served.

Employers told us uncertainty over whether the visa process will provide enough workers hampers their operations, including their ability to plan expansions.

The Homeland Security and Labor Departments have identified possible ways to reduce visa uncertainty, but haven’t determined what can be done under current law.

Our 5 recommendations include evaluating the options and proposing any needed legislative changes to Congress.

A company that employs people using H-2B visas processed this basket of blue crabs in Maryland. 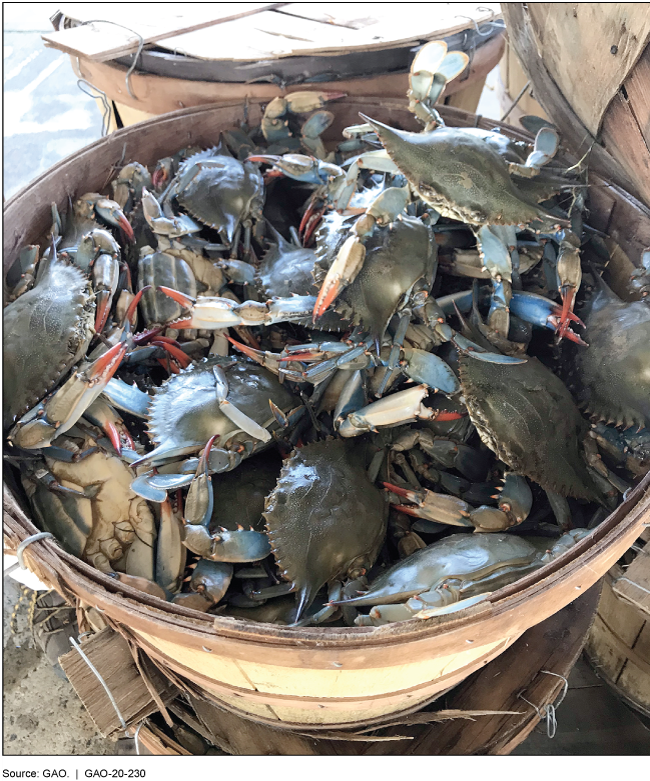 Crabs in a basket

Employer demand for H-2B visa workers has increased as the national unemployment rate has declined. H-2B visas are intended to help employers fill temporary, non-agricultural positions when no U.S. workers are available and are subject to an annual statutory cap of 66,000. From 2010 to 2018, the number of H-2B workers requested on employer applications increased from about 86,600 to 147,600. Regarding local economic conditions, GAO found that counties with H-2B employers generally had lower unemployment rates and higher weekly wages than those without H-2B employers.

Most of the 35 H-2B employers GAO interviewed said that business planning was affected by uncertainty about whether they would be able to hire the number of H-2B visa workers they requested given the statutory cap. Employers who did not receive all H-2B visas requested under the statutory cap in 2018 were somewhat more likely than those who did to report declines in revenue (see figure) and purchases of goods and services. However, GAO found no clear pattern in changes to the number of U.S. workers hired by these employers. Employers interviewed by GAO varied in how they adjusted to having fewer H-2B workers. For example, two seafood employers reported shutting down operations in the absence of H-2B workers, and employers said that barriers to finding U.S. workers included remote location and seasonality of the work.

Federal agencies have identified program changes that consider employers' hiring needs and protect U.S. workers, but gaps remain in implementation. The Department of Homeland Security (DHS), in consultation with the Department of Labor (DOL), has identified options for changing the H-2B visa allocation process to address employers' uncertainty aboutreceiving visas. However, DHS and DOL have not assessed any of these options or determined which would not require Congressional action, and employers continue to struggle with uncertainty. To help ensure H-2B employers comply with U.S. worker recruitment and other requirements, DOL has audited employers' compliance with these requirements. However, in general, DOL randomly selected employers for these audits, rather than taking a risk-based approach using factors such as violation trends by industry. As a result, the agency may not be using its limited audit resources efficiently or effectively.

Since 1990, there has been an annual statutory cap of 66,000 on the number of H-2B visa holders who can work for U.S. employers. DHS administers the program with support from other federal agencies including DOL. In recent years, demand for H-2B visas has exceeded the cap. To meet the needs of U.S. businesses, Congress authorized additional visas in fiscal years 2017-2019. GAO was asked to examine the effects of the annual cap on employers and U.S. workers.

This report examines, among other objectives: (1) trends in the demand for H-2B visa workers, (2) selected employers' reports of the visa cap's influence on their performance and employment of U.S. workers, and (3) how federal agencies have sought to meet employers' H-2B hiring needs and protect U.S. workers. GAO analyzed nationwide data on H-2B visas and county labor market indicators. GAO interviewed 35 H-2B employers in four industries that are among the largest users of H-2B visas. The employers were in five counties selected for variation in factors including the share of H-2B workers in the workforce and the unemployment rate. GAO also reviewed relevant federal laws, regulations, and documents and interviewed federal officials and stakeholders.

GAO is making five recommendations. These include that DHS and DOL assess options to adjust the H-2B visa program and DOL take a risk-based approach to selecting H-2B employers for audits. The agencies agreed with these recommendations as well as one other. DHS disagreed with one, which GAO continues to believe is warranted.