3 federal agencies—the Federal Aviation Administration, the Department of Energy’s Office of Science, and the Bureau of Prisons—spent over $50 million in FY 2018 on warehouses, many of which contain property (like vehicles, furniture, and computers). However, these agencies do not systematically assess whether they still need all of their property.

Federal agencies are required to use General Services Administration guidance to assess the ongoing need for property. However, we found that GSA’s guidance doesn’t describe useful practices for such assessments.

We recommended that GSA include this information in its guidance.

Inmate Mattresses Stored at a Bureau of Prisons Warehouse 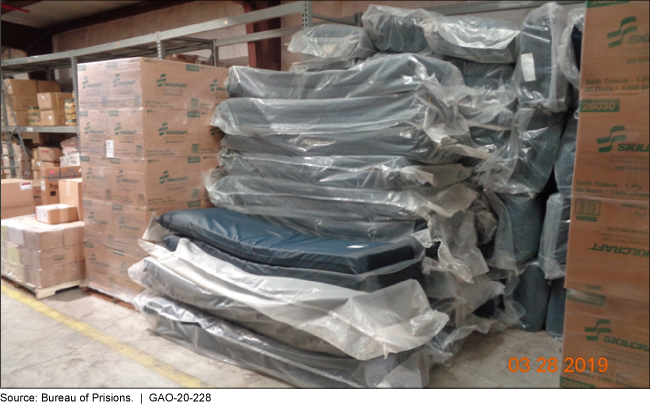 GAO found that three selected agencies stored a wide variety of property in their warehouses. For example:

Examples of Property in Federal Warehouses

The three selected agencies generally did not systematically assess the ongoing need for property in their warehouses and had limited guidance for doing so. For example, although two of the agencies had policies about when such an assessment should occur, none of the agencies specified how it should occur for most types of property. Instead, agencies primarily relied on agency officials' professional judgment to assess ongoing need. GAO identified instances where agencies retained unneeded property absent relevant guidance. For example, one agency site had stored obsolete computers dating back to the 1990s. While the General Services Administration (GSA) drafted guidance in response to recent legislation, this guidance does not describe approaches or practices stakeholders identified as potentially useful for assessing ongoing need for property, such as periodic retention justifications, use of data analytics, and utilization reviews. Further, while GSA officials intend to put the final guidance on GSA's website and provide it to agencies that participate in a GSA-chaired committee on property management by December 2019, GSA has not provided a documented plan or a timeline for broader dissemination. Guidance that incorporates such approaches could help agencies avoid retaining property that is no longer needed and, as a result, allow them to better manage their property and use of their warehouse space.

Federal civilian agencies hold and manage billions of dollars in property that is not considered to be real property, such as vehicles, furniture, computers, and scientific instruments. Some of these items are stored in nearly 18,000 warehouses covering more than 90-million square feet. Agencies are required by law to regularly identify and dispose of unneeded items. However, GAO reported in 2018 that agencies often did not do so. The Federal Personal Property Management Act of 2018 requires agencies to use GSA guidance to assess the utilization and ongoing need for property.

GAO was asked to review property stored in warehouses. This report examines: (1) what is known about property in selected agencies' warehouses and how much agencies spend to store it, and (2) the extent to which selected agencies assess the ongoing need for property stored in warehouses. GAO reviewed federal statutes, regulations, and GSA's guidance; analyzed policies from three agencies—FAA, Office of Science, and BOP—which were selected based on total warehouse square footage, among other factors; conducted site visits to agencies' warehouses; and interviewed stakeholders such as agency officials and industry groups.

GAO recommends that GSA incorporate approaches agencies could use to assess the ongoing need for property in GSA's guidance—such as periodic justifications, use of data, and utilization reviews—and develop a plan for communicating the guidance government-wide. GSA concurred with GAO's recommendation.