If parents and school districts disagree over special education services provided under the Individuals with Disabilities Education Act, either party has options to resolve the dispute, such as mediation or filing a due process complaint.

We found variations by income and race on the types of resolutions sought in 5 states. For example

High-minority districts generally had low dispute activity, except around due process complaints 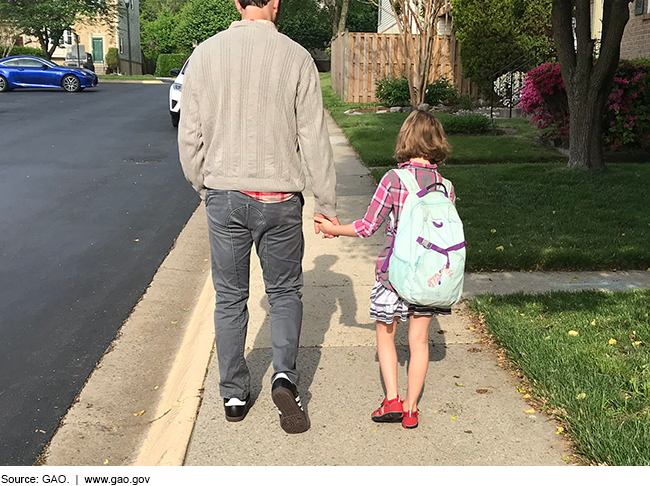 In school year 2016-17, 35,142 special education disputes were filed nationwide, and in five selected states GAO reviewed, dispute resolution options varied across school districts with different socioeconomic and demographic characteristics. The Individuals with Disabilities Education Act (IDEA) provides parents several ways to file and resolve disputes about plans and services that school districts provide to students with disabilities. A greater proportion of very high-income school districts had dispute resolution activity as well as higher rates of dispute activity than very low-income districts in most of the five states GAO reviewed. GAO also found that in most of these states, a smaller proportion of predominately Black and/or Hispanic districts had dispute resolution activity compared to districts with fewer minority students; however, predominately Black and/or Hispanic districts generally had higher rates of such activity. Technical assistance providers and others told GAO that parents used dispute resolution most often for issues related to school decisions about evaluations, placement, services and supports, and discipline of their children. 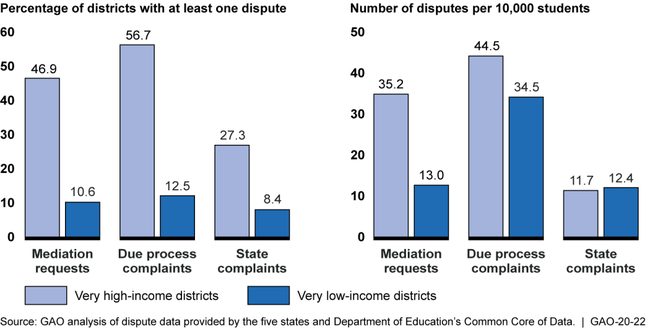 Parents may face a variety of challenges in using IDEA dispute resolution, and the Department of Education and states provide several kinds of support that, in part, may address some of these challenges. Stakeholders cited challenges such as paying for attorneys and expert witnesses at a due process hearing, parents' reluctance to initiate disputes because they feel disadvantaged by the school district's knowledge and financial resources, and parents' lack of time off from work to attend due process hearings. Education and state agencies provide technical assistance to support parents' understanding of their rights under IDEA and to facilitate their use of dispute resolution options, for example, by providing informational documents and phone help lines to parents.

Almost 7 million children aged 3 to 21 received special education services under Part B of the Individuals with Disabilities Education Act (IDEA) in school year 2016-17. IDEA contains options parents and school districts may use to address disputes that arise related to the education of a student with a disability. These options include mediation and due process complaints, which can be used by parents and school districts; and state complaints, which can be used by any organization or individual, including the child's parent, alleging an IDEA violation.

GAO reviewed publicly available data on dispute resolution at the state level and collected data at the school district level from five states—Massachusetts, Michigan, New Jersey, Ohio, and Pennsylvania—selected based on the number of disputes initiated and school district characteristics, among other factors. GAO also reviewed relevant federal laws, regulations, and Education and state documents; and interviewed Education officials, state officials, staff from organizations providing technical assistance in these five states, and other national advocacy organizations.