Airlines sometimes overbook flights, which can mean they have to deny boarding to some passengers. Generally, fewer passengers have been denied boarding in recent years, with less than 1% of passengers affected.

Passengers may volunteer to give up a seat in exchange for some benefit from the airline, like a travel voucher.

Passengers who don’t volunteer and are denied boarding anyway—involuntarily denied boarding or “bumped”—can face travel disruptions and significant costs. While some of these passengers may be eligible for compensation, we found that the percentage of passengers receiving such compensation has declined in recent years.

Fewer Passengers Have Been Denied Boarding Between 2012-2018. 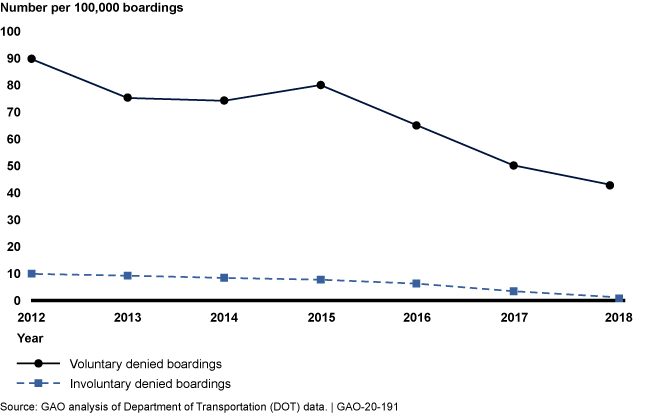 The number of passengers denied boarding (not allowed to board flights they have tickets on) generally decreased in recent years, according to Department of Transportation (DOT) data. Combined, on an annual basis, voluntary and involuntary denied boardings account for less than 1 percent of actual passenger boardings.

Airlines have taken a range of actions, aimed at reducing involuntary denied boardings. Actions include reducing overbookings; requesting volunteers earlier (e.g., at check-in); and increasing compensation for volunteers. While consumer advocates GAO interviewed generally supported these actions, they advocated for an end to overbooking. Three airline revenue management specialists said if airlines were prohibited from overbooking, some airlines may offer fewer discounted fare tickets. Two of these specialists also said airlines might also slightly increase average fares across all tickets.

Some airlines overbook their scheduled flights (intentionally sell more seats than are available) to compensate for passenger no-shows. It is not illegal for airlines to overbook their flights. However, it can result in an “oversale” where airlines cannot accommodate all passengers on a particular flight. In response, airlines may have to deny boarding to some passengers. DOT is responsible for ensuring airlines adhere to their denied boarding practices as part of its consumer protection enforcement responsibilities.

Home for the Holidays? Not So Fast…