The U.S. Postal Service manages a vast network of mail carriers and vehicles that deliver mail to its customers. Since USPS’s costs are growing faster than its revenues, some have suggested that it provide nonpostal services using this network to generate revenue and enhance its value to communities.

We found that such services may increase USPS’s value to communities but they are not likely to improve the agency’s financial position. 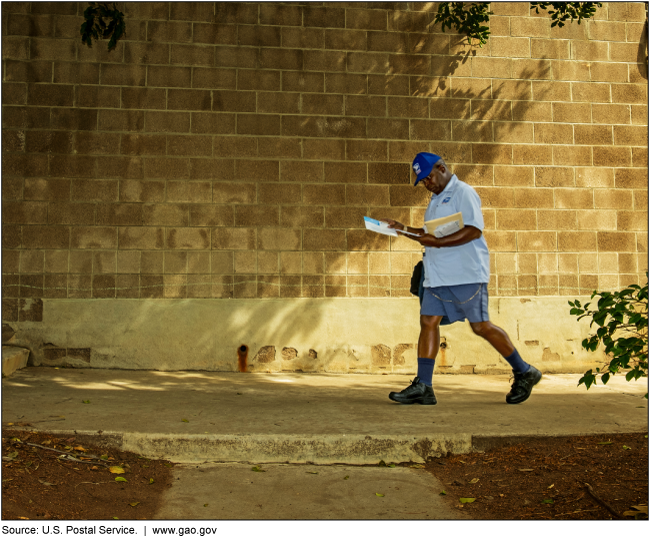 Costs associated with U.S. Postal Service’s (USPS) last mile delivery network, referred to as “last mile” in this report, have increased since 2008 and in 2018 were nearly a third of USPS’s operating costs. GAO found that last mile costs—which consist of street delivery activities and include mail carrier compensation and delivery vehicle maintenance—increased by 19.4 percent from fiscal years 2008 through 2018, while USPS’s modified operating costs were 0.9 percent lower than their amounts in fiscal year 2008 (see figure). According to USPS, it has been able to reduce costs in other areas but is less able to reduce last mile costs, despite a decline in mail volume, because of the requirement to deliver mail 6 days a week and the continued growth in addresses it must deliver to.

Notes: Values in the line graph represent the percentage change in costs relative to their starting values in 2008 and are not adjusted for inflation. Key last mile costs exclude in-office costs.

aIn this report, GAO made certain adjustments to USPS’s total operating expenses by excluding expenses that do not relate to active employees’ current compensation costs because they relate to services performed in the past and thus do not reflect the effect of operational changes. This adjusted measure is referred to as “modified operating costs” in this report.

Providing new nonpostal services that leverage the last mile delivery network could potentially generate more value—including societal benefits and possibly revenue—but also presents a number of limitations and would not likely significantly affect USPS’s current financial condition. For example, adding nonpostal services to existing mail carrier activities—such as providing check-in services for older or homebound individuals—could help improve social isolation among at-risk populations but could distract from USPS’s primary mission of mail delivery. Attaching mobile sensors to delivery vehicles could allow USPS to collect potentially valuable data for other entities—such as mobile wireless coverage and air quality information. According to officials and experts GAO spoke with, USPS could have flexibility in its level of involvement and, for example, allow its vehicles to act as a platform for others to collect data. Alternatively, USPS could collect, store, and analyze these data on its own, functions that could lead to potentially greater revenues but may require large up-front costs. Given that these potential services present both benefits and limitations, the decision to pursue them—including addressing current legal prohibitions—is dependent on the goal for providing such services and desired effect for USPS.

USPS manages a vast “last mile” delivery network of mail carriers and delivery vehicles that move mail from a delivery unit (such as a post office) to its destination. This network is critical to help USPS accomplish its mission of providing postal services throughout the country. However, USPS faces major financial challenges because costs are growing faster than revenues. Given the ubiquity of this network, some have suggested that USPS provide new nonpostal services (i.e., services not directly related to mail delivery) to generate revenue and enhance value to customers and communities. USPS is currently prohibited from providing many nonpostal services.

GAO was asked to review costs of and opportunities for USPS’s last mile network. This report examines: (1) the costs associated with the last mile network and changes since 2008, and (2) the potential benefits and limitations of new nonpostal services, among other topics. GAO analyzed USPS data to estimate key last mile and operating costs for fiscal years 2008 through 2018; reviewed relevant documents and reports from USPS and others; and interviewed USPS officials, postal union representatives, foreign postal operators that have experience with nonpostal services, industry stakeholders, and officials from various federal agencies to obtain their views on the relevant nonpostal services’ benefits and limitations.

GAO is making no recommendation in this report. USPS noted legal and other constraints to offering new nonpostal services that leverage USPS’s last mile network.

This report was revised on December 18, 2019, to correct our summary of the United States Postal Service’s letter commenting on the draft report, on page 33, and to include that letter as appendix II, on page 45.