Since 1789, the U.S. government’s drawback program has encouraged manufacturing and exports by refunding certain customs duties. For example, a merchant who paid duties on imported fabric, made it into clothes, and then exported the clothes could claim a refund for import duties paid. The program refunds about $1 billion a year.

We found problems in how CBP checks these claims. For example, CBP’s new electronic records system doesn’t include enough details on exports. CBP must manually check claims but currently isn’t doing so. It could be issuing refunds it shouldn’t issue.

We made 6 recommendations to address this and other problems. 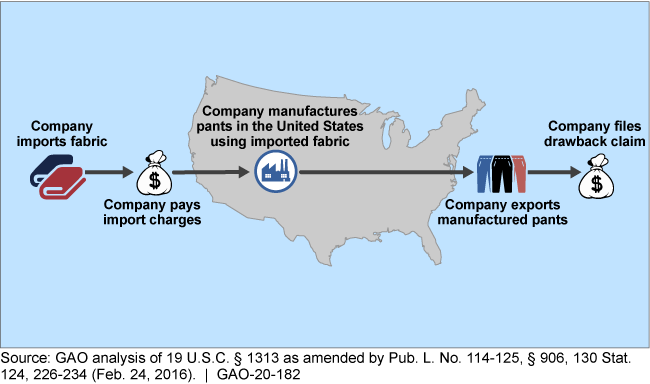 The Trade Facilitation and Trade Enforcement Act of 2015 (TFTEA) generally expanded eligibility for the drawback program, which provides refunds to claimants of up to 99 percent of certain customs duties, taxes, and fees. For example, a claimant could claim a drawback refund on exported pants made in the United States using imported foreign fabric. The expansion from TFTEA has resulted in Customs and Border Protection (CBP) facing a growing workload. According to CBP officials, the most significant change from TFTEA is that it is now easier to qualify for certain drawback refunds. Industry representatives explained that new claimants are seeking drawback refunds and existing claimants are able to increase claim amounts. However, CBP has not adequately managed the increased workload and has not developed a plan for doing so. As a result, CBP faces delays in processing drawback claims that could result in uncertainty for industry, potentially impeding trade.

CBP has taken some steps to address risks of improper payments in the drawback program, but several risks remain. To help ensure it does not overpay funds, CBP now electronically verifies drawback claims against underlying import information. However, CBP cannot verify drawback claims against underlying export information because it does not maintain detailed information about exports in its new electronic system. To compensate for this lack of automated controls, CBP requires manual full desk reviews of a selection of claims to mitigate improper payment risks. However, CBP has not targeted certain claims for a full desk review since switching to the new system on February 24, 2018. The lack of review for claims, which numbered over 35,000 and represented an estimated $2 billion in claims filed as of August 23, 2019, increases the risk of improper payments.

CBP has not produced a reliable assessment of the economic impact of the changes to drawback refund eligibility because of data availability constraints, systems limitations, and other factors. CBP has not prioritized developing a plan to revisit its economic analysis, although new data and systems capabilities are becoming available. Without such a plan, CBP will not have a reliable assessment of the impact of the changes on industry and government.

According to CBP, TFTEA modernized the drawback program, generally broadening the scope of potential claims and allowing electronic filing starting February 24, 2018. As of February 24, 2019, claimants could only file claims under the drawback statute as amended by TFTEA. TFTEA also included a provision for GAO to assess drawback modernization.

This report examines the extent to which (1) modernization affects drawback refund eligibility and CBP's management of its workload, (2) CBP has taken steps to address risks of improper payments in the program, and (3) CBP has analyzed the impact of the changes to the program on industry and government. GAO reviewed statutory, regulatory, and agency documents, and interviewed agency officials and industry representatives.