The Centers for Medicare & Medicaid Services (CMS) reimburses states for most Medicaid costs—health care costs and administrative costs, such as IT. CMS reimbursed states $34.3 billion for Medicaid IT systems in FY 2008-18.

The documentation of CMS's reviews for most IT funding requests 2016-2018 lacked information, indicating that reviews may not have been complete.

CMS is supposed to oversee states' use of funds. But the IT systems had little oversight from either CMS or state chief information officers. Also, CMS was no longer supporting efforts to reduce duplication by sharing state systems.

Our recommendations address the issues we found. 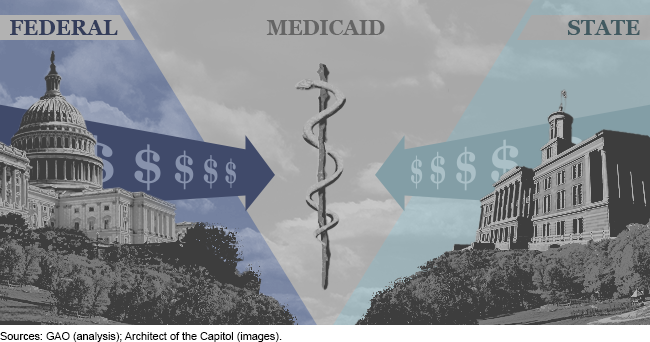 The Centers for Medicare and Medicaid Services (CMS) has reimbursed billions of dollars to states for the development, operation, and maintenance of claims processing and information retrieval systems—the Medicaid Management Information Systems (MMIS) and Eligibility and Enrollment (E&E) systems. Specifically, from fiscal year 2008 through fiscal year 2018, states spent a total of $44.1 billion on their MMIS and E&E systems. CMS reimbursed the states $34.3 billion of that total amount (see figure).

CMS also lacked a risk-based process for overseeing systems after federal funds were provided. CMS provided helpful comments and recommendations to states in selected cases, but in other instances it did not. In two states that had contractors struggling to deliver successful projects, state officials said they had not received recommendations or technical assistance from CMS. The states eventually terminated the projects after spending a combined $38.5 million in federal funds. According to CMS officials, they rely largely on states to oversee systems projects. This perspective is consistent with a 2018 Office of Management and Budget (OMB) decision that federal information technology (IT) grants totaling about $9 billion annually would no longer be tracked on OMB's public web site on IT investment performance. Accordingly, the CMS and Health and Human Services chief information officers (CIO) are not involved in overseeing MMIS or E&E projects. Similarly, 21 of 47 states responding to GAO's survey reported that their state CIO had little or no involvement in overseeing their MMISs. Such non-involvement of officials with duties that should be heavily focused on successful acquisition and operation of IT projects could be hindering states' ability to effectively implement systems.

To improve oversight, CMS has begun a new outcome-based initiative that focuses the agency's review of state funding requests on the successful achievement of business outcomes. However, as of February 2020, CMS had not yet established a timeline for including MMIS and E&E systems in the new outcome-based process.

Description and Status of Centers for Medicare and Medicaid Services Initiatives Aimed at Reducing Duplication by Sharing, Leveraging, and Reusing Medicaid Information Technology

However, as of January 2020, the agency was no longer supporting most of these initiatives because they failed to produce the desired results. CMS regulations and GAO's prior work have highlighted the importance of reducing duplication by sharing and reusing Medicaid IT. To illustrate the potential for reducing duplication, 53 percent of state Medicaid officials responding to our survey reported using the same contractor to develop their MMIS. Nevertheless, selected states are taking the initiative to share systems or modules. Further support by CMS could result in additional sharing initiatives and potential cost savings.

The Medicaid program is the largest source of health care funding for America's most at-risk populations and is funded jointly by states and the federal government.

GAO was asked to assess CMS's oversight of federal expenditures for MMIS and E&E systems used for Medicaid. This report examines (1) the amount of federal funds that CMS has provided to state Medicaid programs to support MMIS and E&E systems, (2) the extent to which CMS reviews and approves states' funding requests for the systems and oversees the use of these funds, and (3) CMS's and states' efforts to reduce potential duplication of Medicaid IT systems.

GAO assessed information related to MMIS and E&E systems, such as state expenditure data, federal regulations, and CMS guidance to the states for submitting funding requests, states' system funding requests, and IT project management documents. GAO also evaluated a generalizable sample of approved state funding requests from fiscal years 2016 through 2018 to analyze, among other things, CMS's review and approval process and conducted interviews with agency and state Medicaid officials. GAO also reviewed relevant regulations and guidance on promoting, sharing, and reusing MMIS and E&E technologies; and surveyed 50 states and six territories (hereafter referred to as states) regarding the MMIS and E&E systems, and assessed the complete or partial responses received from 50 states.

GAO is making nine recommendations to improve CMS's processes for approving and overseeing the federal funds for MMIS and E&E systems and for bolstering efforts to reduce potential duplication. Among these recommendations are that CMS should

develop formal, documented procedures that include specific steps to be taken in the advanced planning document review process and instructions on how CMS will document the reviews;

develop, in consultation with the HHS and CMS CIOs, a documented, comprehensive, and risk-based process for how CMS will select IT projects for technical assistance and provide recommendations to assist states that is aimed at improving the performance of the systems;

establish a timeline for implementing the outcome-based certification process for MMIS and E&E systems; and

identify, prior to approving funding for systems, similar projects that other states are pursuing so that opportunities to share, leverage, or reuse systems or system modules are considered.

In written comments on a draft of this report, the department concurred with eight of the nine recommendations, and described steps it had taken and/or planned to take to address them. The department did not state whether it concurred with GAO's recommendation to encourage state officials to consider involving state CIOs in Medicaid IT projects. HHS stated that it was unable to discern evidence as to whether a certain structure contributed to a specific outcome. GAO believes, consistent with federal law, that CIOs are critically important to the success of IT projects.