The U.S. maritime industry includes U.S.-flag ships (registered to the United States), U.S. citizen crew, and U.S. shipyards. The Department of Defense relies on this industry to carry military cargo around the world in peace and war.

However, the industry has shrunk due to high operating costs and may not be sufficient to support sustained military operations.

In 2014, Congress directed the Department of Transportation to develop a national maritime strategy to help ensure the sustainability of the U.S.-flag fleet. In 2019, DOT renewed stalled efforts to do so, this time with participation from DOD and other key agencies. 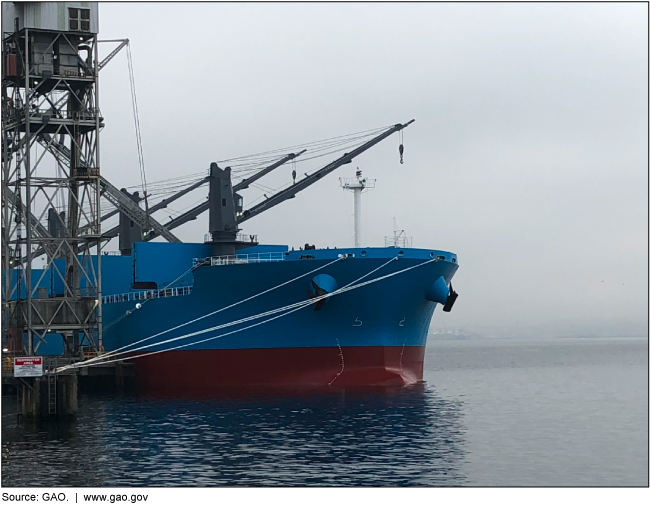 A ship in the water

Selected stakeholders identified some key national defense implications of the challenges facing the U.S. maritime industry. This industry—which includes oceangoing U.S.-registered (i.e., U.S.-flag) ships and U.S. citizen mariners—provides global transportation capabilities to the Department of Defense (DOD) in times of peace, crisis, and war. The Department of Transportation (DOT), in cooperation with DOD and other federal agencies, is responsible for federal programs to ensure that this industry meets defense needs. Stakeholders, as well as DOD officials, cautioned that continued declines in the size and capabilities of the oceangoing U.S.-flag fleet could lead to inadequate capacity for DOD to transport military cargo during a national defense crisis. Likewise, a potential shortage of mariners could lead to DOD not having adequate crews to operate government-owned reserve ships that may be activated during a wartime surge. Seven of the 10 industry stakeholders GAO interviewed stated that a comprehensive national strategy could help address industry challenges.

After a stalled strategy development process that did not include key stakeholders, DOT established a new interagency working group, in September 2019, to finalize the national maritime strategy. DOT has been working on a draft strategy since 2014 to address statutory mandates. In 2017, DOT began revising the draft strategy to align with the new administration's priorities. Interagency coordination, however, was limited as DOT did not include DOD or other key federal stakeholders. In August 2018, DOT submitted the revised draft to the Office of Management and Budget (OMB) for interagency review. OMB staff told GAO they circulated this draft to 12 agencies and two policy councils in the Executive Office of the President. However, according to OMB staff, OMB suspended this process shortly after it began at the request of the Executive Office of the President because of its plans to convene a committee to consider policy matters related to the strategy. According to DOT officials, the process remained suspended until DOT learned in September 2019 that the Executive Office of the President had not convened and no longer planned to convene such a committee. DOT then established a new interagency working group to revise and finalize the strategy, ending a year-long delay in the strategy's development (see figure). This working group includes DOD and other key agencies that were not previously consulted and should address gaps in interagency coordination. DOT officials told GAO that they intend to submit the strategy to Congress by February 2020, as required.

GAO reviewed relevant laws and analyzed DOT and DOD documents related to the U.S. flag fleet. GAO also interviewed: (1) staff in the Executive Office of the President, including OMB, and (2) officials in DOT, DOD, and other federal agencies as well as selected industry stakeholders. Interview selections were based on a range of factors to gather different perspectives across the industry and results are not generalizable to all industry stakeholders.