The United States provided nearly $1.5 billion in weapons, training, and other assistance to Lebanese security forces between 2013 and 2018. We reviewed how State and DOD oversaw and assessed the effectiveness of this assistance in several areas.

State and DOD conducted required inventory checks on U.S.-provided equipment. However, DOD was sometimes late in doing so.

These weapons are part of the security assistance provided to Lebanon.

The Departments of State (State) and Defense (DOD) reported progress in meeting security objectives in Lebanon, but gaps in performance information limit their ability to fully assess the results of security-related activities. State and DOD report improvements in Lebanese security forces' capabilities in key areas, such as border security. As part of monitoring such improvements and assessing the performance of security activities in Lebanon, State created related indicators but has not established targets for all of these indicators. Furthermore, State's data were incomplete for 11 of the 15 indicators GAO analyzed. For example, performance data for three indicators did not identify the number or percentage of people who received security training, as called for by the indicator. Without addressing these gaps, State has limited ability to determine to what extent it is achieving the intended results of its security-related activities in Lebanon.

State and DOD use two primary safeguards to limit the risk of terrorist organizations benefitting from U.S. assistance to Lebanon. First, State routinely reviews the leadership of the Lebanese military and police forces and has determined they are not controlled by a foreign terrorist organization. Second, State and DOD vet potential trainees to ensure they do not have known or suspected ties to terrorism.

Example of U.S. Equipment Provided to the Lebanese Armed Forces 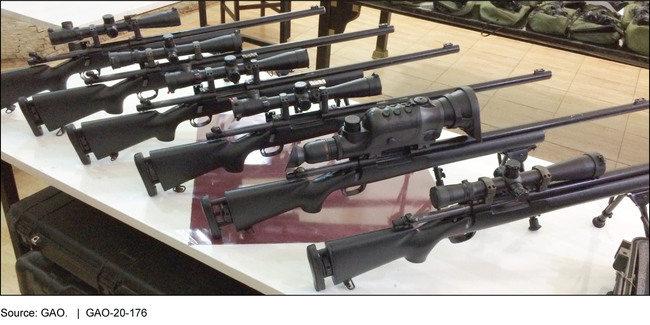 Consistent with end-use monitoring requirements, State and DOD conducted required inventory checks of equipment provided to Lebanese security forces, but DOD did not meet its timeliness standards for nearly one-third of its observations. According to DOD officials, the method DOD uses to determine when it should complete annual inspections does not consider the date of the equipment's last inspection, which results in some inspections taking longer than prescribed by DOD's timeliness standards. Without conducting checks in a timely manner, DOD cannot fully ensure the equipment is properly accounted for and safeguarded.

Since 2013, State and DOD have obligated nearly $1.5 billion in assistance to support Lebanese security forces. U.S. support for Lebanon is complicated due to the prominent role in the country of Hizballah, an Iranian-backed terrorist organization, which retains considerable influence as a major political party and a militia. The U.S. support includes equipment and training to build the capacity of Lebanese security forces. The equipment provided is subject to end-use monitoring requirements, which seek to ensure items are properly accounted for in Lebanon's inventory.

GAO was asked to review U.S. security assistance provided to Lebanon since 2013. For fiscal years 2013 through 2018, this report (1) examines to what extent State and DOD assessed progress toward achieving strategic objectives related to security; (2) describes safeguards to limit the risk of U.S. assistance benefitting terrorist organizations; and (3) evaluates State and DOD end-use monitoring checks of equipment provided to Lebanese security forces. GAO analyzed State and DOD reports, documents, and data; and interviewed officials in Washington, D.C. and Beirut, Lebanon.

GAO is making three recommendations: 1) State should establish, as appropriate, and consolidate targets for its security-related performance indicators; 2) State should collect complete performance data for security-related indicators; and 3) DOD should revise its approach for determining when end-use monitoring inspections are to be completed to consider the date of last inspection. State and DOD concurred with these recommendations.