Of the 27 major acquisition programs we reviewed, 25 were meeting current goals for schedule and cost—an increase from 2017.

We also reviewed how these programs established cost, schedule, and performance goals. Generally, we could trace the cost and performance goals back to the plans and information used to set them—but not the schedule goals. So, DHS leaders may be approving schedules that don’t match execution plans. We recommended better oversight to improve how schedule goals are set.

A Helicopter DHS Acquired from the U.S. Army 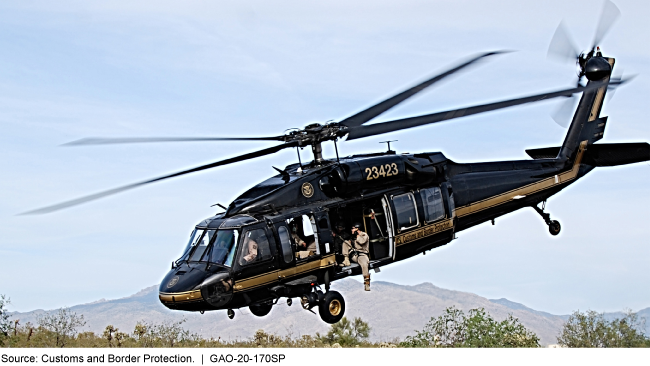 A helicopter in flight

As of August 2019, 25 of the 27 Department of Homeland Security (DHS) programs GAO assessed that had approved schedule and cost goals were on track to meet current goals. The remaining two programs breached their schedule or cost goals. This represents an improvement since GAO's last review. However, GAO found that some of the programs that were on track as of August 2019 are at risk of not meeting cost or schedule goals or both in the future. For example, the U.S. Coast Guard's Offshore Patrol Cutter program faces potential cost increases and schedule slips in the future as a result of damages to the shipbuilder's facility from Hurricane Michael in October 2018.

Traceability, which is called for in DHS policy and GAO scheduling best practices, helps ensure that program goals are aligned with program execution plans, and that a program's various stakeholders have an accurate and consistent understanding of those plans and goals. Of the 27 programs GAO assessed, 21 had established baselines after DHS updated its acquisition policy in March 2016 (the most current version of the policy at the beginning of this review). GAO found that the 21 programs' baseline cost and performance goals generally traced to source documents, such as life-cycle cost estimates and planned performance outcomes. However, schedule goals did not generally match up to the programs' integrated master schedules (IMS), as required by DHS acquisition management instruction and as a best practice identified in GAO's Schedule Assessment Guide (see figure).

The lack of traceability between IMSs and schedule goals in the approved acquisition program baselines (APB) indicates that DHS does not have appropriate oversight processes in place to ensure that schedules are accurately reflected in program baselines, in accordance with DHS policy and GAO's best practices. Therefore, DHS cannot ensure that the understanding of program schedules among different stakeholders, including component and DHS leadership is consistent and accurate. As a result, DHS leadership may be approving program schedule goals that do not align with program execution plans.

Each year, the DHS invests billions of dollars in a diverse portfolio of major acquisition programs to help execute its many critical missions. DHS plans to spend more than $10 billion on these programs in fiscal year 2020 alone. DHS's acquisition activities are on GAO's High Risk List, in part, because of management and funding issues. The Explanatory Statement accompanying the DHS Appropriations Act, 2015 included a provision for GAO to review DHS's major acquisitions on an ongoing basis.

This report, GAO's fifth review, assesses the extent to which: (1) DHS's major acquisition programs are on track to meet their schedule and cost goals, and (2) current program baselines trace to key acquisition documents.

GAO assessed 27 acquisition programs, including DHS's largest programs that were in the process of obtaining new capabilities as of April 2018, and programs GAO or DHS identified as at risk of poor outcomes. GAO assessed cost and schedule progress against baselines; compared APB cost, schedule and performance parameters to underlying documents used in establishing baselines; and interviewed DHS officials.

GAO is making two recommendations, including that DHS put in place an oversight process to ensure that programs' schedule goals are developed and updated according to GAO's scheduling best practices. DHS concurred with GAO's recommendations.