The Census Bureau needs an accurate address list to count everyone once, only once, and in the right place. To that end, the Bureau allows tribal, state, and local governments to review and offer updates to its master address list.

The Bureau received 5.1 million updates—more than it expected. As a result, it only reviewed a fraction of them in the office. This means that Census workers will have to visit more addresses in person—which could mean millions of dollars of additional fieldwork.

For the future 2030 Census, we recommended reviewing more of these updates in the office. 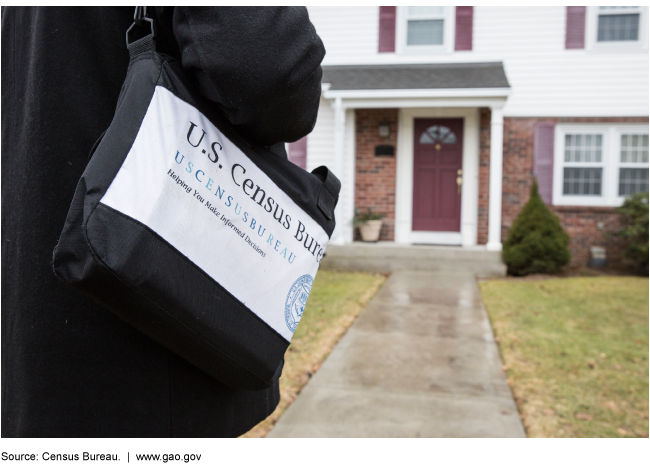 The Census Bureau generally followed the operational design for its Local Update of Census Addresses (LUCA) program, which is intended to give tribal, state, and local governments the ability to review and offer modifications to the Bureau's Master Address File (MAF). The Bureau met milestones, apart from extending the participation window for natural disaster-stricken areas, and generally followed plans for outreach, training, and participation options.

However, some decisions created additional fieldwork. The Bureau received more updates from participants than it expected, so it only reviewed roughly 860,000 of the 5.1 million updates that did not match to the MAF (see figure below). The rest will be added to potential fieldwork. Had more addresses been reviewed in-office, many may have been rejected, based on the rejection rate for reviewed addresses. Avoiding this unnecessary fieldwork could have saved the Bureau millions of dollars when following up with non-responding households.

The Bureau has not reexamined LUCA with respect to the cost, quality, and public perception of the census since the program was authorized in 1994. Yet much has changed since then, from the tools the Bureau uses in building its address list to the provision of publicly accessible address data. As the Bureau turns to its strategic planning process for 2030, it will have several issues to address regarding the future of LUCA, including:

whether LUCA should continue to have a role in building the address list given the advent of other address-building initiatives;

how often to have governments review the MAF for the census, in light of the costs and benefits of administering such a program more frequently;

whether statutory nondisclosure protection of census address data is still needed given that address data sources and services are more prevalent.

A complete address list is a cornerstone of the Bureau's effort to conduct an accurate census. LUCA is one of several operations the Bureau uses to produce its address list. It gives tribal, state, and local governments the opportunity to review the address list for their areas and provide the Bureau with any updates before the census.

GAO was asked to review the status of LUCA, including its effect on other operations, as well as LUCA's overall effectiveness and necessity. This report examines (1) LUCA's status and its likely effects on 2020 field operations, and (2) what considerations the Bureau and other stakeholders could use to reexamine LUCA for 2030. GAO reviewed Bureau plans, analyzed data from LUCA participation and the Bureau's review of submissions, and held 9 discussions on a possible reexamination of LUCA with relevant Bureau officials, a council representing participating governments, and census data subject matter specialists.

GAO is making eight recommendations to the Department of Commerce, including that the Bureau ensure more LUCA submissions are reviewed and reexamine LUCA to address the related issues GAO identified as part of the Bureau's strategic planning process for the 2030 Census. The Department of Commerce agreed with our findings and recommendations and described several cost savings and efficiency gains—which we have not audited—from their related address list-building efforts. The Census Bureau, Office of Management and Budget, and U.S. Department of Transportation each also provided us with technical comments, which we incorporated as appropriate.