We reviewed how the Small Business Administration planned for and responded to Hurricanes Harvey, Irma, and Maria in 2017, among other things.

After the hurricanes, SBA accepted about 340,000 disaster loan applications and approved about 141,000, making more than $7 billion in loans to help business owners, homeowners, renters, and nonprofits recover. Loan processing averaged 18 days or less.

SBA’s disaster plans lack an in-depth discussion of how to deal with risks such as extended power outages that could curtail its response. We made 5 recommendations, including that SBA better document risks and how to mitigate them in its disaster plans.

Number of Disaster Applications to Be Processed, by Hurricane and Month/Year 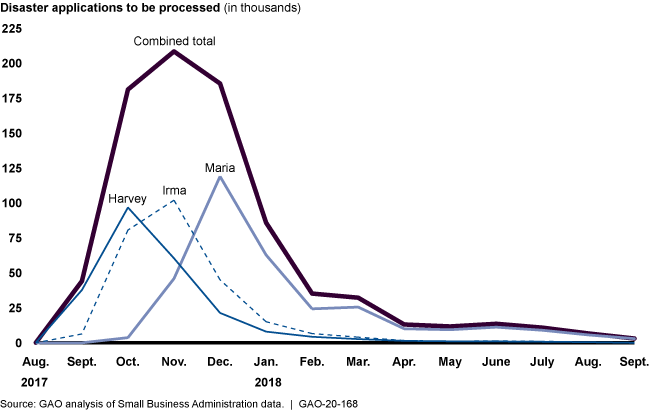 The Small Business Administration's (SBA) Office of Disaster Assistance, which administers the Disaster Loan Program, regularly develops disaster plans but does not discuss risks and risk mitigation in detail in its planning documents. Specifically, SBA's current Disaster Preparedness and Recovery Plan lacks an in-depth discussion of risks (including extended power and communications outages) that could affect its disaster response. SBA's disaster response includes deploying staff to and establishing centers in disaster areas to accept loan applications. The aftermath of the 2017 hurricanes (Harvey, Irma, and Maria) illustrates how the risks affected SBA's disaster loan operations. For example, because of widespread power outages (particularly in Puerto Rico), loan applicants often could not submit applications electronically and SBA often could not call or e-mail applicants. As a result, SBA may not be adequately prepared to respond to challenges that arise during its disaster response efforts.

Changes SBA made to the loan application process since 2005 (such as implementing electronic applications) improved timeliness. For the 2017 hurricanes, SBA processed more than 90 percent of all loan applications (including those quickly declined or withdrawn) within its 45-day goal, averaging less than 18 days for each hurricane. Overall, about 49 percent of applications submitted after the 2017 hurricanes were approved (see figure). Applicants and others with whom GAO spoke noted some application challenges, including frequent changes to SBA contact staff and having to resend documents. According to SBA officials, staff changes resulted from turnover, among other reasons. Many applicants in Puerto Rico also encountered translation challenges during interactions with SBA.

SBA has no plans to evaluate its Express Bridge Loan Pilot Program, a loan guarantee program that began in October 2017 and is set to expire on September 30, 2020, and is intended to offer small businesses quicker funding after disasters. As of September 2019, SBA had received 93 applications, but most of them were incomplete and SBA had guaranteed only two loans. The Office of Capital Access, which manages the pilot, had not sought feedback from lenders on why so few loans had been made. Without evaluating program design and implementation, SBA's ability to make an informed decision on the program's future, including assessing potential demand for bridge loans, is limited.

SBA assists most types of businesses regardless of size and others affected by natural and other declared disasters through its Disaster Loan Program. Disaster loans can be used to help rebuild or replace damaged property or continue business operations.

GAO is making five recommendations to SBA, including that it more comprehensively document risks and plans to mitigate these risks and evaluate the implementation of the Express Bridge Loan Pilot Program. Overall, SBA agreed with the recommendations, but described actions that partially address the recommendation for evaluating the pilot. GAO maintains it should be fully implemented, as discussed in the report.