Following ship collisions in 2017 that resulted in the loss of 17 sailors’ lives and significant damage to Navy ships, the Navy has added classroom and simulator training for the Surface Warfare Officers who drive these ships. The Navy plans to triple ship-driving training hours by 2021.

However, the Navy does not yet have a plan to collect fleet-wide feedback on the quality of the new training or routinely test ship-driving skills. We recommended the Navy gather this feedback and take other actions to better measure training quality. 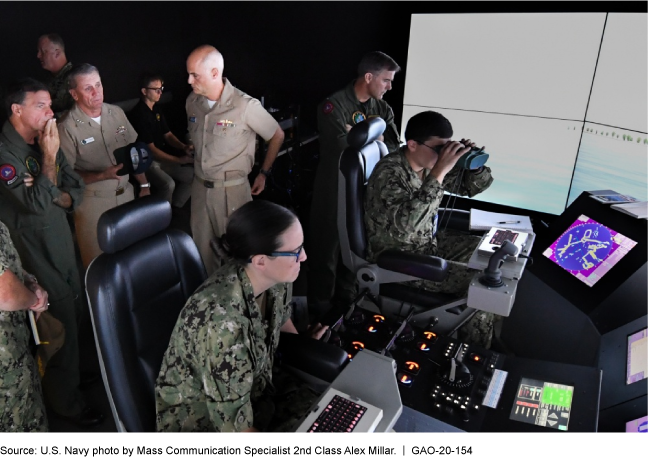 Since 2017, the Navy has made numerous changes and plans additional changes to enhance Surface Warfare Officer (SWO) ship-driving training. The Navy plans for these changes to result in a threefold increase in the number of initial ship-driving training hours for SWOs by 2021, compared with the number of training hours prior to the 2017 collisions (see fig.). The Navy added classroom and simulator time to existing training courses to improve ship-driving skills and is developing two additional simulator-based ship-driving courses planned for 2021. These plans hinge on the completion of two new simulator-based training facilities, scheduled for completion in June 2021 and in January 2023.

The Navy has relied on added skill checks conducted throughout a SWO's career to ensure that each SWO has basic ship-driving skills, but has not put key processes and assessments in place to evaluate comprehensively the effectiveness of its changes to ship-driving training. Senior Navy officials stated that it could take 16 years or more to know if the planned changes to SWO training were effective in increasing Commanding Officer ship-driving proficiency across the fleet and stated that they intend to closely monitor the implementation of changes to the training. However, GAO found that in planning an approach for evaluating the changes, the Navy has not:

(1) identified a method to solicit fleet-wide feedback on the quality of the increased ship-driving training received by SWOs;

(2) planned to routinely conduct ship-driving competency “spot checks” that were instituted after the 2017 collisions despite Navy inspectors having found concerns with more than 80 percent of SWOs' ship-driving skills;

(3) provided standard criteria to ship Commanding Officers for qualifying SWOs to drive ships, contributing to significant variance in ship-driving experience and competency levels across the fleet; nor

(4) developed a specific plan to analyze and use information from logbooks in which SWOs are to document ship-driving and related experience.

Without addressing these challenges, the Navy cannot assess in the near term if the significant investments made to expand and enhance SWO ship-driving training are effective; further adjustments are necessary; and Navy ships are being operated safely at sea.

In 2017, the Navy had four mishaps at sea including two collisions that resulted in the loss of 17 sailors' lives and hundreds of millions of dollars in damage to Navy ships. In the wake of those mishaps, the Navy identified deficiencies in SWO ship-driving training and related experience as contributing factors and has undertaken a number of efforts to improve these areas.

Senate Report 115-262, accompanying a bill for the Fiscal Year 2019 National Defense Authorization Act, contained a provision that GAO assess SWO training. This report (1) describes the changes the Navy has made to SWO ship-driving training since the 2017 collisions and (2) assesses the extent to which the Navy has taken actions to evaluate the effectiveness of changes made to SWO ship-driving training. GAO reviewed and analyzed changes made to Navy training and assessment practices and related investments; interviewed cognizant officials; and conducted discussions with SWOs aboard 12 ships.

GAO is making four recommendations to the Navy to routinely evaluate SWO training, including that the Navy collect and evaluate fleet-wide feedback on the quality of training; routinely conduct ship-driving competency assessments; provide standard criteria for qualifying ship drivers; and develop a plan to analyze and use logbook information. The Navy concurred with GAO's recommendations.