Robocalls and other unwanted calls consistently rank among the top consumer complaints to FCC and FTC.

We looked at what federal agencies are doing to protect consumers. We found the 3 agencies involved are investigating and prosecuting scammers, educating the public, and supporting a new industry-developed system to detect spoofing—scheduled to roll out by year’s end. 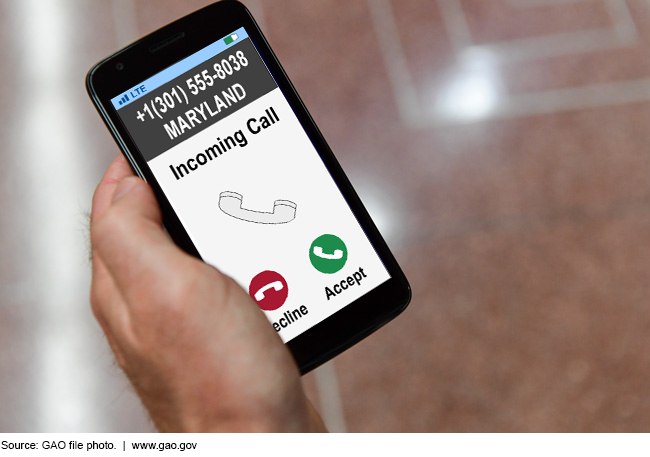 Transmitting fake caller ID information with a phone call, also referred to as “spoofing,” is in many cases illegal—and is used in schemes to obtain money and personal information or generate telemarketing leads. Complaints submitted to the Federal Communications Commission (FCC) and the Federal Trade Commission (FTC), both of which work to protect consumers from spoofing, suggest that spoofing is a growing issue.

FCC, FTC, and the Department of Justice (DOJ) identified 62 enforcement cases they have brought since 2006 involving spoofing. Enforcement can be challenging, as it can be difficult to identify the source of spoofed calls, and scammers may be based overseas. Nevertheless, GAO found that the agencies prioritize their spoofing-related enforcement actions based in part on the level of harm perpetrated against the public and generally follow key practices identified by GAO for effective collaboration. Additionally, FCC and FTC have proposed changes to law to enhance the effectiveness of their enforcement efforts, such as a change that would allow FCC more time to bring certain enforcement actions. Furthermore, FCC's and FTC's consumer education efforts related to spoofing align with key practices for collaboration and consumer education. For example, FCC and FTC have developed consistent and clear messages related to spoofing.

FCC's Graphic on How to Avoid Being Victimized by Spoofing

Several major telecommunications carriers are taking key steps to put an industry-developed technical system in place designed to reduce spoofing by December 2019, which FCC has encouraged in line with federal guidance. This system is intended to enable carriers to verify whether a caller has a right to use the caller ID being transmitted with the call. Carriers can use this information to better determine whether to block or warn consumers about the incoming call. Stakeholders cautioned that the system cannot determine whether a caller has fraudulent intentions but only whether the caller is using a spoofed number. FCC has followed relevant federal guidance in participating in the development of this system by, for example, encouraging industry to accelerate deployment of the system, monitoring industry's progress, and providing input into the process.

Unwanted phone calls, which may also involve spoofing, consistently rank among the top consumer complaints to FCC and FTC. In recent years, consumers have lost millions of dollars—and been deceived into providing financial or other sensitive information or purchasing falsely advertised products—due to schemes using these calls. FCC, FTC, and DOJ have efforts aimed at combatting the fraudulent use of caller ID spoofing.

Recently enacted federal legislation included a statutory provision for GAO to review federal efforts to combat the fraudulent use of caller ID spoofing. This report examines (1) what is known about caller ID spoofing schemes, including any recent trends; (2) federal agency enforcement and consumer education efforts; and (3) the status of industry efforts to develop technologies to combat spoofing, and FCC's role in these efforts.

Love is a complicated concept. Artists, poets, and everyone else have struggled forever trying to...
Blog Post