The General Services Administration created a publicly available database of federal buildings, structures, and land. People can search the database for any reason, such as finding property to lease for a cell tower site.

We found numerous issues with the database which reduce its benefit. For example, 67% of addresses are incorrectly formatted or incomplete, making it hard to locate specific buildings when searching.

Lack of reliable data on federal assets is one of the main reasons Federal Real Property Management remains on our High Risk list. We made 6 recommendations to improve database accuracy, completeness, and usefulness.

Water towers misidentified in the database as office buildings 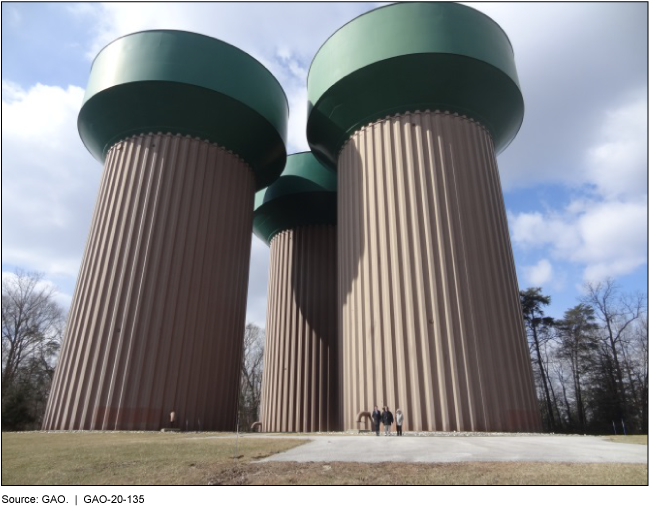 The General Services Administration (GSA) has worked in recent years to improve reliability of the Federal Real Property Profile (FRPP), which tracks federal real property assets. However, numerous errors in the database were carried into the public version. GSA extracted data from the FRPP's 398,000 civilian federal assets to create a public database to be used, for example, by researchers and real estate developers. However, GSA's data verification process did not address key errors. GAO found that 67 percent of the street addresses in the public database were incomplete or incorrectly formatted. For example, the database lists “Greenbelt Road” as the address for over 200 buildings at NASA's Goddard Space Flight Center, but the road stretches over 6.3 miles, thereby reducing a user's ability to locate specific buildings.

The public database is not complete because GSA and selected agencies decided not to provide certain useful information. Specifically, GSA withheld assets' information without consulting those agencies managing the assets and allowed agencies to withhold information that is already publicly available. For example, GSA withheld the name “Goddard Space Flight Center” from the public database, but NASA's website lists this name and the Center's location. Unnecessarily withholding information limits the database's utility and undermines analysis.

The public database's usefulness is further limited by how GSA presents the information. Because the database does not identify if an asset is part of a secure installation, the public does not know if assets, such as the unnamed buildings at Goddard, are accessible to the public. Unless GSA improves the public database's accuracy, completeness, and usefulness, its benefits may not be realized.

The lack of reliable data on federal assets is one of the main reasons Federal Real Property Management remains on GAO's high risk list. In 2016, legislation required GSA to publish a single, comprehensive, and descriptive database of federal real property that would be available to the public. The database could be used for research and other potential applications. GAO was asked to study the public database. This report assesses (1) GSA's efforts to improve the reliability of FRPP's data and the public database, (2) the public database's completeness, and (3) the presentation of the data in the public database.