The Coast Guard maintains a network of signs, markers, buoys, and lighthouses to help mariners safely navigate through U.S. waters. The condition of these navigation aids—both fixed (e.g., lighthouses) and floating (e.g., buoys)—has declined in recent years while the overall costs for repairing or replacing them have gone up.

The Coast Guard is considering ways to address this situation, such as replacing steel buoys with cheaper-to-maintain foam buoys where practicable. We recommended that the Coast Guard determine desired outcomes to be achieved and associated milestone dates to better ensure effective implementation of these initiatives.

This 6’ x 20’ lighted steel buoy is eroded and rusty from extended exposure to saltwater and other harsh maritime conditions. 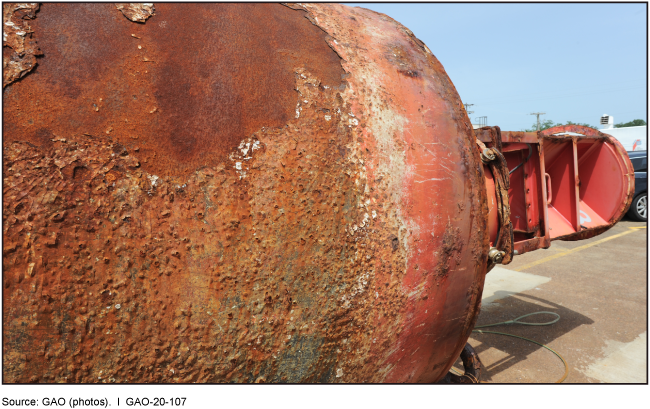 The condition of the Coast Guard's aids to navigation (ATON), both fixed (e.g., lighthouses) and floating (e.g., buoys), have declined slightly while the overall costs for repairing or replacing them increased in recent years. According to Coast Guard data, its key metric for ATON condition—the Aid Availability Rate, or percentage of time that ATON are functioning correctly—declined from 98.0 to 97.1 percent during fiscal years 2014 through 2018, dipping slightly below the 97.5 percent target rate in fiscal years 2017 and 2018. During this time period, the overall costs to repair and replace ATON increased from about $12 million in fiscal year 2014 to about $20 million in fiscal year 2018. According to Coast Guard data, the majority of the costs for fixed ATON were spent on repairs whereas the majority of the costs for floating ATON were spent on replacements.

Examples of the Deteriorating Condition of Some Fixed and Floating ATON

The Coast Guard faces challenges in managing its fixed and floating ATON and has developed plans and initiatives to address them, but it has limited assurance that the plans and initiatives will be effectively implemented. According to Coast Guard officials, the challenges include decreased availability of vessels to service ATON, reduced ability to provide routine ATON servicing in a timely manner due to severe weather, among other factors, and limited capacity at ATON major repair and refurbishment facilities. The Coast Guard has developed plans to guide the ATON program, and these plans have led to the development and implementation of various initiatives at the headquarters and field unit levels to address these challenges. However, GAO found that the initiatives do not contain certain elements that help ensure effective implementation—such as desired outcomes and schedule milestones and completion dates—as recommended by leading program management practices. According to Coast Guard officials, they are still developing guidance and procedures for ATON-related initiatives that are to be implemented by the districts. By updating these initiatives to include certain elements, such as the specific outcomes desired and timeframes for completing them, the Coast Guard would have better assurance that its initiatives to address ATON management challenges will be effectively implemented.

One of the Coast Guard's statutory missions is the care and maintenance of ATON. Much like drivers need signs and universal driving rules, mariners need equivalent nautical “rules of the road.” As of November 2019, the Coast Guard managed 45,664 federal fixed and floating ATON that are designed to assist those operating in the U.S. Marine Transportation System, which includes about 25,000 miles of waterways, 1,000 harbor channels, 300 ports, and 3,700 terminals. According to the Coast Guard, as of July 2018, these ATON had a collective replacement value of about $1.6 billion. The Coast Guard has faced an array of challenges in managing its ATON, such as deteriorating buoys, and questions have been raised regarding the extent to which the Coast Guard is addressing these challenges.

This report (1) describes what is known about the condition and costs of maintaining the Coast Guard's ATON, and (2) examines challenges the Coast Guard has experienced in managing its ATON and how it is addressing them. To address these issues, GAO reviewed ATON regulations and guidance, analyzed data on ATON condition and cost measures, collected input from all nine Coast Guard districts on ATON challenges, accompanied ATON units on mission activities, assessed agency initiatives using leading program management practices, and interviewed headquarters and field unit officials.

GAO recommends that the Coast Guard update its ATON initiatives by including the specific outcomes to be achieved and associated time frames. The Department of Homeland Security concurred with the recommendation.

From Search and Rescue to Special Forces: The U.S. Coast Guard’s Many Missions