Mass mailing campaigns can result in thousands of duplicate comments. Agencies can post them individually, as attachments to a single comment, or as a count of duplicates received. Practices vary among agencies, within agencies, and for each rule.

The variation in how agencies post comments could create an inaccurate view of who submitted public comments. We testified about our recommendations that agencies should more clearly communicate their comment policies. 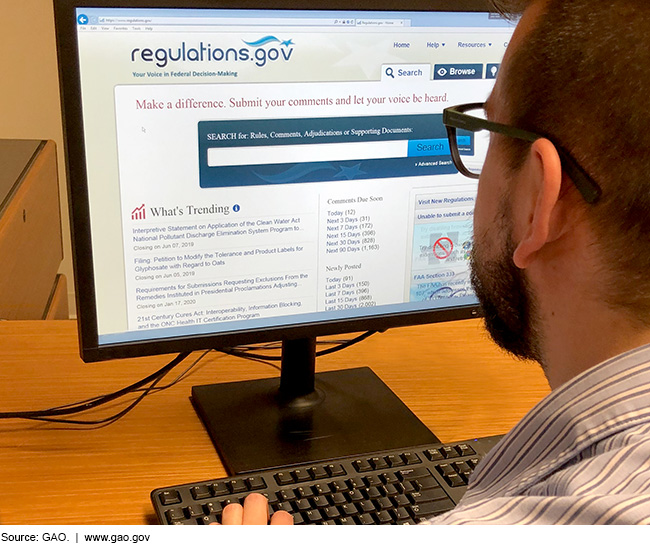 The Administrative Procedure Act (APA) governs the process by which many federal agencies develop and issue regulations, which includes the public comment process (see figure).

The Rulemaking Process under the Administrative Procedure Act

In June 2019, GAO found that Regulations.gov and agency-specific comment websites collect some identity information—such as name, email, or address—from commenters who choose to provide it during the public comment process. The APA does not require commenters to disclose identity information when submitting comments. In addition, agencies have no obligation under the APA to verify the identity of such parties during the rulemaking process.

GAO also found that the selected agencies' practices for posting public comments to comment websites vary considerably, particularly for duplicate comments (identical or near-identical comment text but varied identity information). For example, one agency posts a single example of duplicate comments and indicates the total number of comments received, but only the example is available to public users of Regulations.gov. In contrast, other agencies post all comments individually. As a result, identity information submitted with comments is inconsistently presented on public websites.

The APA allows agencies discretion in how they post comments, but GAO found that selected agencies do not clearly communicate their practices for how comments and identity information are posted. GAO's key practices for transparently reporting government data state that federal government websites should disclose data sources and limitations to help public users make informed decisions about how to use the data. If not, public users of the comment websites could reach inaccurate conclusions about who submitted a particular comment, or how many individuals commented on an issue.

Federal agencies publish on average 3,700 proposed rules yearly and are generally required to provide interested persons (commenters) an opportunity to comment on these rules. In recent years, some high-profile rulemakings have received extremely large numbers of comments, raising questions about how agencies manage the identity information associated with comments. While the APA does not require the disclosure of identifying information from a commenter, agencies may choose to collect this information.

In June 2019, GAO made recommendations to eight of the selected agencies regarding implementing and communicating public comment posting policies. The agencies generally agreed with the recommendations and identified action they planned to take in response. Since the June 2019 report, one agency has implemented GAO's recommendation.