To address maintenance issues, DOD has transferred the ownership of more than 600 utility systems located on military installations to private and public entities since 1988. DOD and others are concerned about how long the contracting process takes.

We found that DOD took about 4 years to award 21 new utility services contracts between 2016 and 2018. DOD, however, did not track the total time to award these contracts or systematically collect lessons learned.

We recommended that DOD 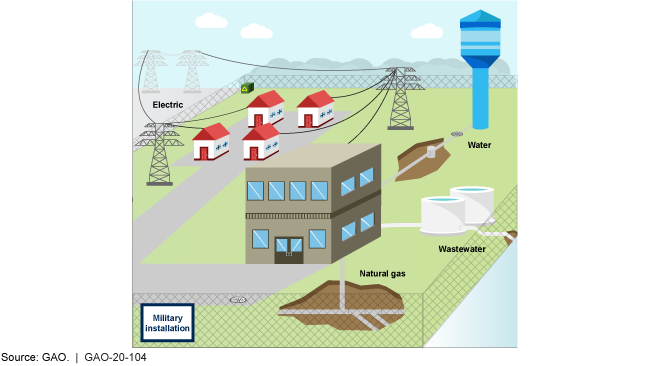 From fiscal years 2016 through 2018, Department of Defense (DOD) components awarded 21 new contracts for privatized utility services on military installations. The contracting process generally took an average of 4 years from solicitation to contract award. However, the entire pre-award contracting process could be longer, as GAO found that DOD does not maintain complete data on the time to conduct key steps in the acquisition planning phase (see table).

GAO found that DOD does not maintain data on when military departments begin to consider privatization and when a complete inventory of the associated infrastructure, such as pipes and valves, is available to use in the solicitation. While no DOD regulation or policy that GAO reviewed requires the collection of data on the time to complete all pre-award activities, in 2014, Defense Logistics Agency Energy officials established milestones to plan and monitor key pre-award activities. GAO found that the length of time from receipt of requirements to contract award was reduced from an average of 61 months pre-2014 to an average of 35 months post-2014.

The lessons learned efforts of DOD to shorten the time to award contracts have fully or partially demonstrated four of five leading practices. DOD's efforts include:

Since 1988, military departments have privatized utility systems—such as electricity, water, natural gas, and wastewater—on military installations. DOD awards privatized utility services contracts to companies who upgrade, maintain, and operate the systems. Members of Congress and stakeholders have expressed concerns over the length of time it takes to award these contracts. DOD has a goal of reducing the time frames.

A House committee asked GAO to review DOD's utilities privatization. This report examines (1) the length of time to award contracts for privatized utility services, and (2) the extent to which DOD is demonstrating leading practices to collect and disseminate lessons learned.

GAO recommends that (1) DOD and the military departments collect information on the time to complete key steps when awarding these contracts, and (2) DOD develop a mechanism to store and archive lessons learned from across the department. DOD partially concurred with both recommendations, noting that it would be beneficial to expand the actions GAO had recommended. GAO agrees that such an expansion would be helpful in efforts to collect more data.