According to IRS, the Tax Cuts and Jobs Act of 2017 was the most sweeping tax law change in over 3 decades—with 86 provisions that modified, added to, or repealed business and international taxes.

IRS prioritized and implemented key provisions of the act and provided taxpayer guidance.

But there are challenges to fully implementing the act. For example, tax return data related to some of the new provisions isn’t in a readily usable format. As a result, IRS may not be able to promptly identify and alert taxpayers who aren’t in compliance. We recommended determining which data would be most cost effective to transcribe, and then doing so. 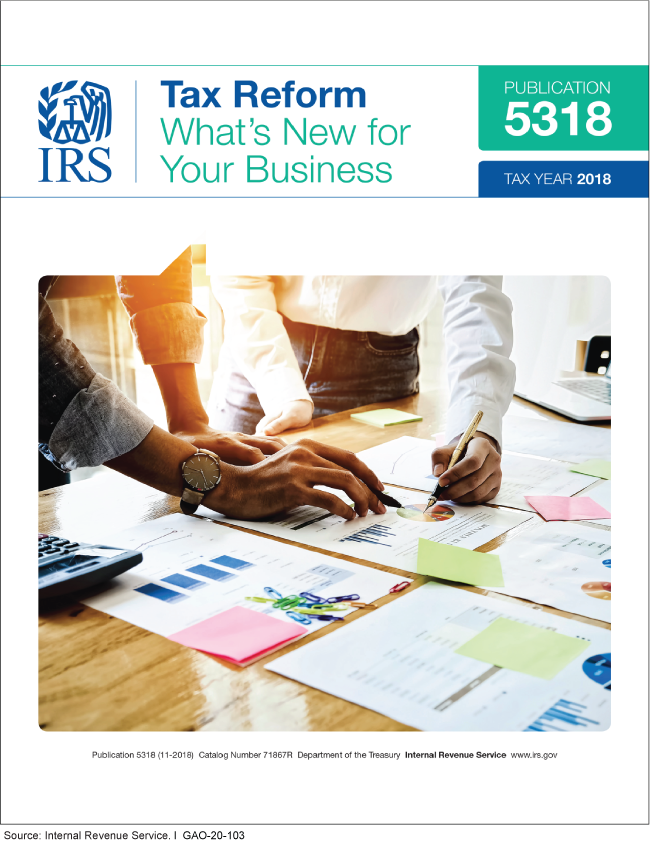 The Internal Revenue Service (IRS) has made considerable progress issuing guidance to taxpayers for Public Law 115-97—commonly known as the Tax Cuts and Jobs Act of 2017 (TCJA)—but has additional work remaining to issue all planned guidance, as shown in the figure.

Internal Revenue Service Implementation of Planned Guidance for Public Law 115-97, Commonly Known as the Tax Cuts and Jobs Act of 2017

Notes: IRS refers to regulations and other information that it considers binding on the IRS—including the types in the figure above—as guidance. This figure displays completed and planned guidance at the end of fiscal year 2019.

To improve efficiency of TCJA guidance development, IRS internally collaborated earlier and more frequently than during more routine tax law changes. IRS officials said the benefits of this enhanced collaboration included faster decision-making on time-sensitive guidance, including regulations. IRS officials agreed enhanced collaboration had value but as of December 2019 had not identified the parameters for when this collaborative approach would be warranted.

IRS may face challenges ensuring compliance with certain TCJA provisions because third-party information reporting is not always available. GAO's past work has found that one of the important factors contributing to the tax gap is the extent to which information is reported to IRS by third parties. Without third-party reporting, IRS will have to rely on resource-intensive audits to enforce certain TCJA provisions, which could be challenging given recent trends of declining audit rates and enforcement staff. GAO has recommendations from March 2019 for IRS to take actions to mitigate hiring risks and reduce skill gaps.

IRS was also unable to update all information technology systems prior to the start of the 2019 tax season due to the magnitude of TCJA changes. As a result, IRS was not able to capture certain tax return information in a format that can be easily analyzed to help with compliance planning activities. One IRS division took steps to convert certain tax return data to a more useable format, but efforts to identify other viable opportunities have not been taken. Without appropriate data for analyses, IRS could face challenges enforcing certain TCJA provisions.

According to IRS, TCJA was the most sweeping tax law change in more than three decades, with 86 provisions that modified, added to, or repealed business and international taxes, such as the qualified business income deduction. IRS determined it would take significant effort to implement the law given the limited time-frame and magnitude of the provisions.

GAO was asked to review IRS's implementation of TCJA business and international provisions. Among other reporting objectives, this report examines IRS's (1) progress implementing the provisions, (2) processes to provide guidance, and (3) challenges for effectively administering these provisions.

GAO is making five recommendations, including that IRS develop and document procedures for continued enhanced collaboration and convert tax return data to a more useable format for compliance purposes. IRS disagreed; however, GAO believes that these recommendations will benefit guidance development and tax administration.

In prior work, GAO recommended that IRS measure which activities are producing desired hiring outcomes and take steps to reduce skill gaps among revenue agents. IRS agreed with these recommendations and, as of December 2019, plans to report on efforts to close skill gaps by December 2021.