Indian tribes are sovereign nations with the authority to govern and protect their own citizens. However, we found several factors that prevent tribes from taking full advantage of that authority. For example:

When a tribe pursues a contract to administer certain federal programs, tribal leaders aren't given enough information to make a decision or negotiate the contract well.

We recommended ways to address these and the other factors we identified. 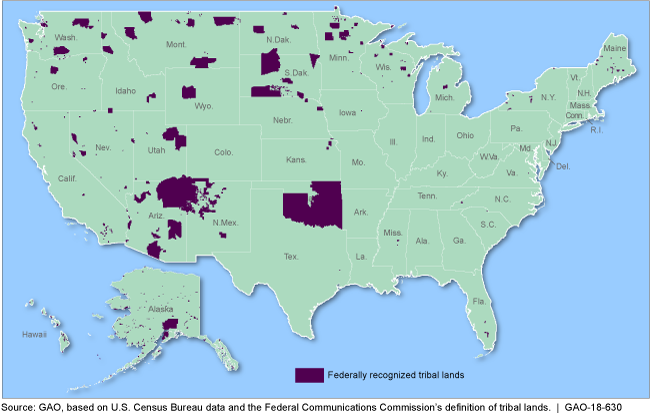 This is a map showing tribal lands across the United States.

GAO found that various factors can affect tribes' use of self-determination contracts and self-governance compacts under the Indian Self-Determination and Education Assistance Act of 1975 (ISDEAA), as amended, and tribal leasing under the Helping Expedite and Advance Responsible Tribal Home Ownership Act of 2012 (HEARTH Act). A key factor that helps tribes use these self-governance mechanisms is tribal government capacity to administer a federal program or manage these resources. Federal efforts that have helped build this capacity have included training, such as that offered by the Bureau of Indian Affairs (BIA) in 2014 and 2015 to educate tribes on the benefits of developing tribal leasing regulations under the HEARTH Act. In contrast, GAO found that other factors can hinder tribes' use of these mechanisms including:

Inadequate Information Sharing. The Department of the Interior's (Interior) policy and guidance states that tribes should be provided necessary information to design programs they would like to self-administer, such as the amount of funding available to the tribes for the programs and the amount retained by Interior for inherently federal functions. However, according to several tribal stakeholders and some BIA regional officials GAO spoke to, some of this information is not made available to the tribes prior to self-determination contract negotiations, such as information on funding calculations and determinations of inherently federal functions. Without this information, according to a tribal stakeholder, tribes may be at a disadvantage when negotiating with BIA and designing programs for self-determination contracts.

Delays in Disbursing Funds. According to tribal stakeholders, Interior's process does not ensure that funds associated with their self-determination contracts and self-governance compacts are disbursed in a timely manner. These funding delays can therefore be a factor that hinders their use of self-government mechanisms. Some tribal stakeholders said that disbursement delays have ranged from weeks to months. GAO was unable to determine the extent to which Interior disburses funds in accordance with ISDEAA or within agreed-upon time frames with the tribes, because Interior does not systematically track and monitor the disbursement of these funds.

Lengthy Review of Proposed Tribal Leasing Regulations. Interior does not have a clearly documented process for reviewing proposed tribal leasing regulations submitted under the HEARTH Act with identified time frames associated with each step of the process. As a result, tribal stakeholders told GAO that they are uncertain about how long the process will take and how it aligns with the 120 day requirement in the Act. According to tribal stakeholders and GAO's analysis of proposed regulations submitted from 2012 through 2017, Interior's review process has resulted in lengthy review times—in some cases, multiple years. Some tribal officials told GAO that Interior's lengthy review process had delayed the tribe's ability to make decisions about the use of their resources. By developing a clearly documented process that includes established time frames for each step in the review, Interior can help eliminate uncertainty and improve the transparency of the review process for the tribes.

For more than 4 decades, federal Indian policy has promoted tribal self-government—the practical exercise of Indian tribes and nations' inherent sovereign authority. Under ISDEAA, federally recognized tribes may request to enter into self-determination contracts and self-governance compacts with Interior, transferring the administration of federal programs to the tribe. Under the HEARTH Act, tribes may issue certain leases on their lands without Interior approval if such leases are executed under approved tribal regulations.

GAO is making four recommendations, including that Interior develop processes to share how it makes funding and inherently federal function determinations with tribes, to track and monitor the disbursement of funds within agreed upon time frames, and for the review of proposed tribal leasing regulations including review time frames. Interior concurred with GAO's recommendations.