There is a vast, aging Coast Guard infrastructure along the shore that includes piers, docks, and other facilities. The Coast Guard estimated that its backlog of construction and improvement projects would take $1.7 billion and 395 years to address. That doesn't include the Coast Guard's maintenance backlog, which would bring the total cost to at least $2.6 billion.

While the Coast Guard has a culture of “making do” with the resources it has, these backlogs pose financial, safety, and mission performance risks.

We made 6 recommendations to help the Coast Guard better manage its resources to address shore infrastructure challenges.

The Coast Guard "makes do" with this temporary boat maintenance facility at Base Alameda in California. 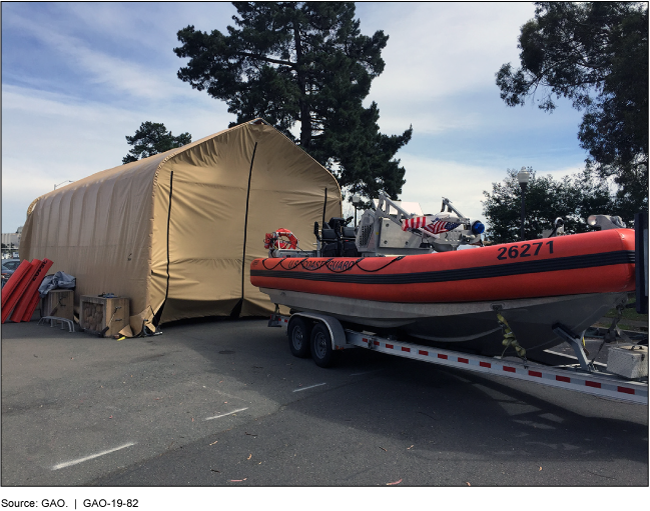 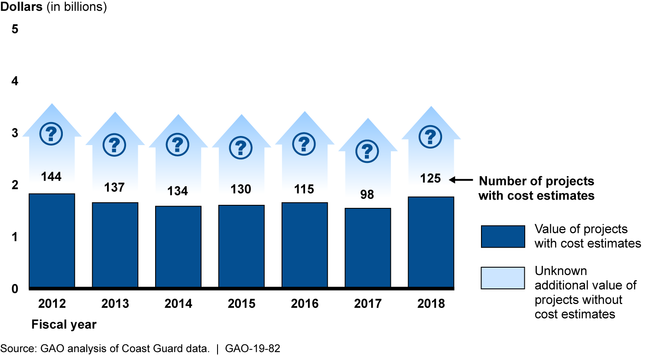 Note: The arrows are intended to characterize the uncertain costs due to the lack of Coast Guard cost estimates associated with those projects.

The Coast Guard, within the Department of Homeland Security (DHS), owns or leases more than 20,000 shore facilities, such as piers, docks, boat stations, air stations, and housing units, at more than 2,700 locations. In June 2017, the Coast Guard testified to Congress that it had a $1.6 billion recapitalization backlog for its shore infrastructure, which had a replacement value of about $20 billion.

GAO is making six recommendations, which DHS agreed to implement, including that the Coast Guard align its management of its shore infrastructure backlogs with leading practices by requiring the use of models for predicting the outcome of, and optimizing among, competing investments for maintenance projects.