Where roads and train tracks meet, accidents can be deadly. A federal program helps states fund projects to make these crossings safer.

State officials told us that the program's requirements favor certain projects, such as gates—but most of the crashes since 2009 have happened at crossings with gates, largely because of impatient drivers who drive through or go around. Officials said that the requirements may be preventing them from using more innovative approaches.

As greater rail and road use is expected in the future, we recommended that the Department of Transportation evaluate whether the program's requirements need to be more flexible. 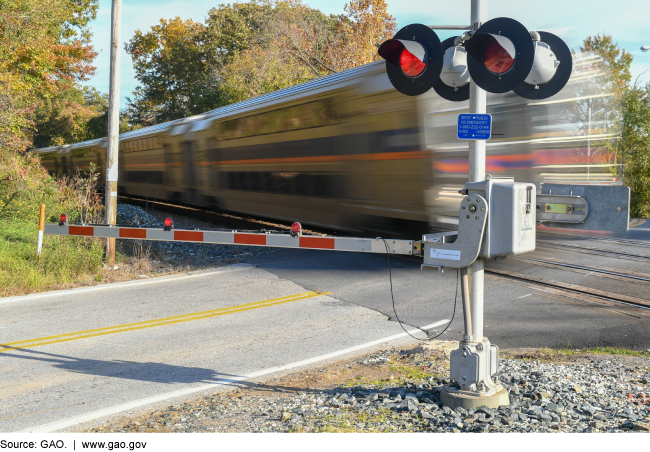 This is a photo of where a railroad crosses a road with the gate down as a train races by.

Research sponsored by the Federal Railroad Administration (FRA) has identified driver behavior as the main cause of highway-rail grade crossing crashes and that factors such as train and traffic volume can contribute to the risk of a crash. (See figure.) Over 70 percent of fatal crashes in 2017 occurred at grade crossings with gates.

Examples of Drivers' Behavior Contributing to Crashes at Grade Crossings

To meet the requirements of the federal grade-crossing program, states are responsible for selecting and ensuring the implementation of grade-crossing improvement projects. Most state DOT officials and other relevant transportation officials use local knowledge of grade crossings to supplement the results of models that rank grade crossings based on the risk of an accident. These states generally consider the same primary risk factors, such as vehicle and train traffic. FRA is taking steps to improve the data used in its model to help states assess risk factors at grade crossings. For example, FRA's grade-crossing inspectors will review and identify issues with railroad- and state-reported inventory data. FRA is currently developing guidelines, which it plans to finalize by the end of 2018, to implement these inspections as it has for other types of FRA inspections.

Officials we spoke with in eight states reported challenges in pursuing certain types of projects that could further enhance safety, in part because of federal requirements. While safety has improved, many crashes occur at grade crossings with gates, and officials said there could be additional ways to focus program requirements to continue improving safety. States' and the Federal Highway Administration's (FHWA) reporting focuses on the program's funding and activity, such as the number and types of projects, yet the low number of crashes makes it difficult to assess the effectiveness of projects in reducing crashes and fatalities. FHWA reports the program has been effective in reducing fatalities by about 74 percent since 1975. However, since 2009, annually there have been about 250 fatalities—almost one percent of total highway fatalities. FRA expects future crashes to grow, in part, due to the anticipated increase in rail and highway traffic. An evaluation of the program should consider whether its funding and other requirements allow states to adequately address ongoing safety issues. FHWA officials said they are not required to perform such evaluations. GAO has previously reported on the importance of program evaluations to determine the extent to which a program is meeting its objectives. An evaluation of the program could lead FHWA to identify changes that could allow states to more strategically address problem areas.

Crashes at highway-rail grade crossings are one of the leading causes of railroad-related deaths. According to FRA data, in 2017, there were more than 2,100 crashes resulting in 273 fatalities. Since 2009 crashes have occurred at a fairly constant rate. The federal government provides states funding to improve grade-crossing safety through FHWA's Section 130 Program. The persistence of crashes and deaths raises questions about the effectiveness of the federal grade-crossing-safety program.

GAO was asked to review federal efforts to improve grade-crossing safety. This report examines: (1) the focus of FRA's grade-crossing-safety research, (2) how states select and implement grade-crossing projects and what data are available from FRA to inform their decisions, and (3) the challenges states reported in implementing and assessing projects and the extent to which FHWA assesses the program's effectiveness. GAO analyzed FRA data; reviewed FRA's, FHWA's, and states' documents; reviewed a study of states' selection of projects; and interviewed FRA and FHWA headquarters and field staff, and officials from a non-generalizable sample of eight states, selected to include a mix in the number of grade crossings and crashes, and geographic diversity.

GAO recommends that FHWA evaluate the program's requirements to determine if they allow states the flexibility to address ongoing safety issues. The Department of Transportation concurred with GAO's recommendation.