We spoke with stakeholders (including prosecutors and airport police) who said current assault laws and law enforcement resources—primarily at the state and local levels—were generally sufficient to deal with these incidents. Airlines are also required under a new federal law to develop employee assault prevention and response plans for handling such incidents. 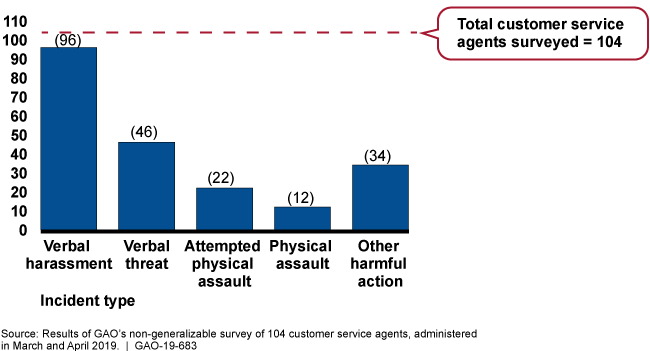 No comprehensive data are available to determine the nature and frequency of passenger assaults—e.g., verbal threats, attempted physical acts, or actual physical acts—against airline customer service agents at airports. This lack of data is due, in part, to the limited federal role in addressing such assaults. GAO's survey of 104 airline customer service agents showed that over half (61) reported experiencing such action in the past year, while almost all reported experiencing verbal harassment. About 10 percent reported experiencing physical assaults. Stakeholders GAO interviewed said that while passengers are often verbally disruptive, physical assaults are less frequent. These stakeholders also said that alcohol consumption, frustration over airlines' business practices (e.g., fees for checked or carry-on baggage), and long lines can contribute to these incidents.

Airline Customer Service Agents Who, in 2019, Reported Experiencing Aggressive Passenger Behavior within the Past Year, by Type of Behavior

Of the stakeholders—i.e., airlines, airports, law enforcement, and prosecutors— GAO interviewed who provided perspectives and have responsibilities for passenger assaults, all 23 said state and local laws sufficiently deter and address such incidents, and 15 (of 20) said current resources are sufficient. One prosecutor told GAO the transitory nature of airports makes it difficult to get witnesses to testify at trial; when prosecuted, passengers generally face misdemeanor charges. While stakeholders GAO interviewed generally did not identify gaps in resources, some said incidents could be further mitigated if, for example, airports made law enforcement's presence more visible or airlines provided conflict de-escalation training to customer service agents. The FAA Reauthorization Act of 2018 required that airlines (1) provide such training to all employees, and (2) submit plans to the Federal Aviation Administration (FAA) by January 2019 detailing how airlines respond to passenger assaults. In July 2019, FAA issued a notification to airlines reminding them to submit their plans; officials said they will continue to follow up with airlines until they receive the plans.

Recent media reports have detailed incidents at airports where passengers have acted disruptively or violently toward airline customer service agents, who assist passengers checking into their flights and boarding aircraft, among other things. While state and local laws generally prohibit these types of actions, some stakeholders have raised questions about these agents' safety.