The Violence Against Women Act self-petition program is intended to protect foreign nationals who suffered domestic abuse at the hands of a family member who is a U.S. citizen or lawful permanent resident. Successful petitioners can obtain work authorization and permanent resident status independent of their abuser.

We made 3 recommendations to U.S. Citizenship and Immigration Services, including that the agency improve its ability to use data to better detect potential fraud. 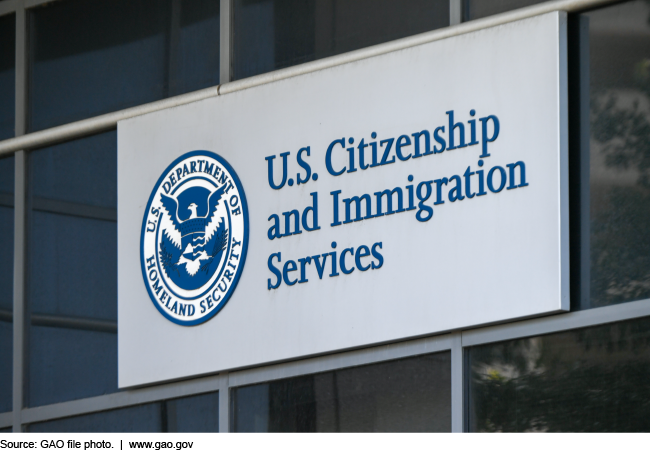 Within the Department of Homeland Security (DHS), U.S. Citizenship and Immigration Services (USCIS) has responsibility for the Violence Against Women Act (VAWA) self-petition program for foreign national victims of battery or extreme cruelty committed by their U.S. citizen or lawful permanent resident (LPR) spouse or parent, or their adult U.S. citizen son or daughter. According to USCIS officials, the self-petition program is vulnerable to fraud, such as self-petitioners' use of false or forged documents. USCIS has adopted some, but not all, of the leading practices in GAO's Fraud Risk Framework. While USCIS has established a culture and a dedicated entity to manage fraud risks for the program, it has not fully assessed fraud risks and determined a fraud risk profile to document its analysis of the types of fraud risks the program could be vulnerable to. Further, the number of self-petitions filed has grown by more than 70 percent over the past 5 fiscal years. At the end of fiscal year 2018, USCIS had received 12,801 self-petitions and had over 19,000 self-petitions pending adjudication. Planning and conducting regular fraud risk assessments would better position USCIS to identify fraud risks when reviewing self-petitions. USCIS has instituted some fraud controls, such as developing antifraud training for self-petition adjudicators, but has not developed and implemented a risk-based antifraud strategy based on a fraud risk assessment. Developing and implementing an antifraud strategy would help USCIS better ensure its controls are addressing potential fraud risks in the program.

DHS provides assistance to victims of immigration-related crimes and refers suspected self-petition fraud for review and investigation. Within DHS, U.S. Immigration and Customs Enforcement provides professional services and assistance to potential victims of immigration-related crimes, including self-petition fraud. As shown in the figure below, USCIS also has a referral process for suspected fraud in self-petitions, which may result in a referral for criminal investigation. According to agency data, from fiscal year 2014 to March 2019, USCIS created 2,208 fraud referral leads and cases that involved a VAWA self-petition. Total leads and cases increased from 198 in fiscal year 2014 to 801 in fiscal year 2019 as of March 2019, an increase of about 305 percent.

In fiscal year 2018, foreign nationals filed nearly 13,000 VAWA self-petitions alleging domestic abuse by a U.S. citizen or LPR family member. The Immigration and Nationality Act, as amended by VAWA, provides for immigration relief for self-petitioning foreign nationals who are victims of battery or extreme cruelty committed by their U.S. citizen or LPR family member. The self-petition process allows such victims to obtain classification as an immigrant and ultimately apply for LPR status.

GAO is making three recommendations, including that USCIS conduct regular fraud risk assessments to determine a fraud risk profile for the program and develop an antifraud strategy with specific control activities. DHS concurred.