The Coast Guard has more than 20,000 shore facilities—such as boat stations and piers—that are often vulnerable to damage from natural disasters such as hurricanes and earthquakes.

While the Coast Guard has improved some of its facilities to make them more resilient, it can do more to stay on top of the risk. For example, DHS’s guidance suggests prioritizing projects by how crucial the asset is to the mission. The Coast Guard, however, hasn’t assessed the majority of its infrastructure—including piers, which are mission critical.

We recommended that the Coast Guard improve how it assesses and prioritizes its resilience projects. 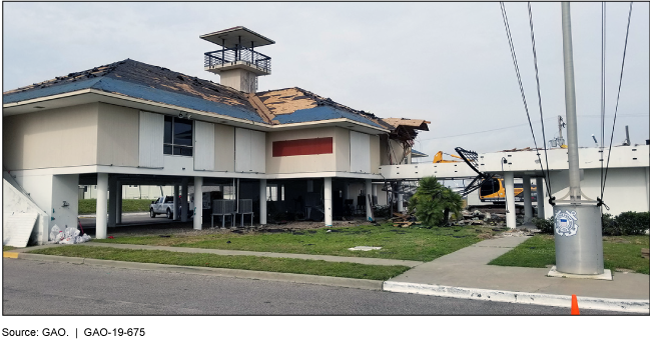 Since 2005, the U.S. Coast Guard's main actions to improve resilience have been to repair or rebuild shore infrastructure to higher building standards after it has been damaged by extreme weather events. The Coast Guard has received more than $2 billion in supplemental appropriations since 2005 to improve resilience after severe storms (see figure). The Coast Guard has also developed new guidance requiring that repairs and new construction meet higher building standards to make it more resilient. Further, in 2015, the Coast Guard began an assessment of certain occupied buildings to identify their vulnerabilities to ten natural hazards, such as hurricanes and earthquakes. As of 2018, this assessment covered approximately 16 percent of the Coast Guard's shore infrastructure. The Coast Guard aims to complete the assessment in 2025.

Coast Guard processes to improve shore infrastructure resilience do not fully align with the Department of Homeland Security's (DHS) key steps for critical infrastructure risk management. These steps are described in DHS's Critical Infrastructure Risk Management Framework, which recommends that DHS components, among other things, identify critical infrastructure, assess risks, and implement risk management activities. While the Coast Guard has identified some vulnerable shore infrastructure through its ongoing assessment, it has not identified all shore assets that may be vulnerable, such as piers and runways; or assessed operational risks affecting its ability to complete missions with these assets. In addition, the Coast Guard has not taken steps to develop mitigation strategies for buildings already identified as vulnerable. Moreover, Coast Guard data show a growing backlog of at least $2.6 billion in recapitalization, new construction, and deferred maintenance projects that compete for finite funding. However, Coast Guard officials were unable to verify that they have consistently selected projects to also enhance resilience. Coast Guard officials stated that they have not used the DHS framework and have instead focused on implementing their ongoing vulnerability assessment. Fully aligning its processes with the DHS framework would better position the Coast Guard to reduce its future fiscal exposure to the effects of extreme weather events.

The Coast Guard, within DHS, owns or leases more than 20,000 shore facilities such as piers, boat and air stations, and housing units at over 2,700 locations. This infrastructure is often positioned on coastlines where it is vulnerable to damage from extreme weather. Noting the importance of protecting critical infrastructure from such risks, in 2013 DHS updated its risk management guidance for enhancing infrastructure resilience—which is the ability to prepare and plan for, absorb and recover from, or successfully adapt to adverse events.