Broadband service on tribal lands continues to lag behind the rest of the country, limiting tribes’ access to the Internet—especially in rural areas. In such areas, wireless broadband can help keep people connected.

We testified that the Federal Communications Commission could do more to promote and support tribes' access to radio frequency spectrum that can be used for such wireless service.

In the report on which this testimony is based, we made 3 recommendations to FCC to help improve tribes' access. 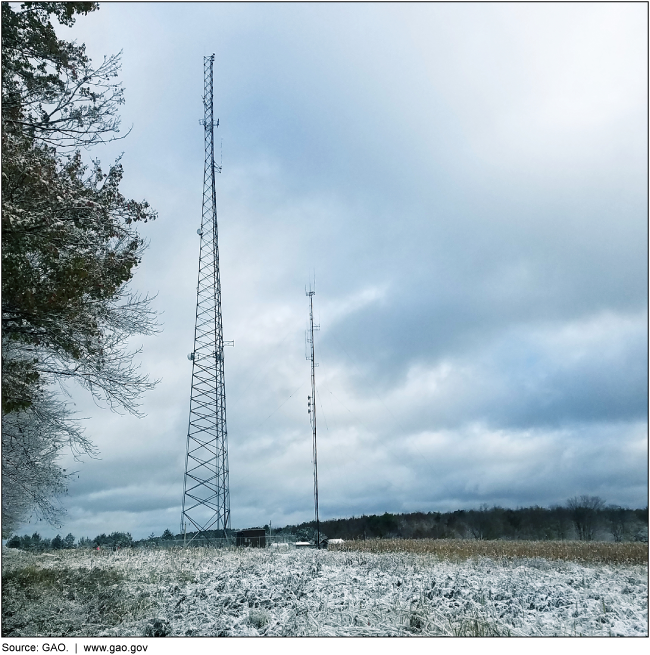 A cell tower in a snowy field

The tribal entities—tribal governments and tribally owned telecommunications providers—GAO contacted for its November 2018 report cited various barriers to obtaining spectrum licenses in bands that can be used to provide broadband services. Based on data from the Federal Communications Commission (FCC) as of September 2018, GAO identified 18 tribal entities that held active spectrum licenses in such bands. For example, of these 18 tribal entities, 4 obtained licenses through secondary market transactions—that is, they bought or leased the license from another provider, and 2 obtained a license through an FCC spectrum auction. The barriers tribal officials identified to obtaining licensed spectrum include high costs at auctions and, in the case of secondary market transactions, a lack of information on who holds licenses over tribal lands. Because most spectrum allocated for commercial use has already been assigned, the secondary market is one of the few avenues available to tribal entities that would like to access licensed spectrum.

At the time of GAO's November 2018 report, FCC had taken some actions to increase tribal access to spectrum. For example, FCC issued proposed rulemakings in 2011 and 2018 that sought comment on tribal-specific proposals, such as establishing tribal-licensing priorities and initiating processes to transfer unused spectrum licenses to tribal entities. FCC had not finalized these rules at the time of GAO's report, but FCC published a draft order in June 2019 that would create a tribal-licensing priorty window, whereby tribal entities would have an opportunity to obtain spectrum in the 2.5 gigahertz (GHz) band prior to the spectrum being auctioned. FCC adopted the order on July 10, 2019. FCC stated that it will implement spectrum initiatives and that it recognizes the importance of promoting a robust secondary market to improve communications throughout the United States, including tribal lands. However, GAO found that FCC had not consistently collected data related to tribal access to spectrum. For example:

FCC did not collect data on whether spectrum auction applicants are tribal entities and therefore did not have a comprehensive understanding of the extent that tribal entities are attempting to obtain licensed spectrum.

FCC did not analyze the extent that unused licensed spectrum exists over tribal lands. Although FCC officials said evaluating the effectiveness of FCC's secondary market policies is a way to increase the use of unused spectrum, FCC's approach did not include an analysis of unused spectrum licenses on tribal lands. As a result, FCC's evaluations of the secondary market may not accurately reflect how its policies affect tribal entities.

By collecting data on the extent that tribal entities are obtaining and accessing spectrum, FCC could better understand tribal spectrum issues and use this information as it implements ongoing spectrum initiatives. Further, given that the secondary market is one of few ways for tribal entities to access licensed spectrum to provide Internet service, FCC could promote a more robust secondary market by analyzing unused licensed spectrum over tribal lands and using that information to inform FCC's oversight responsibilities.

This statement is based on GAO's November 2018 report (GAO-19-75) related to spectrum use for broadband services by tribal entities and selected updates. Specifically, it discusses (1) tribal entities' ability to obtain and access spectrum to provide broadband services and the reported barriers that may exist, and (2) the extent to which FCC promotes and supports tribal efforts to obtain and access spectrum. For that report, GAO interviewed 16 tribal entities that were using wireless technologies. Selected entities varied geographically, among other characteristics. GAO analyzed FCC's license and auction data as of September 6, 2018, reviewed FCC's rulemakings on spectrum for broadband services, and interviewed other tribal and industry stakeholders and FCC officials. The information obtained was not generalizable to all tribes or industry participants. As an update, GAO reviewed FCC's June 2019 draft order related to spectrum in the 2.5 GHz band.

In the November 2018 report, GAO made three recommendations to FCC, including that FCC should collect data on tribal access to spectrum and analyze unused licensed spectrum over tribal lands. FCC agreed with the recommendations and described actions to address them.