The Department of Defense relies on its laboratories to help keep the military on the cutting edge of technology. Congress has given DOD's labs special "authorities"—flexibilities that lab directors can use to foster innovation and improve efficiency.

We looked at how DOD labs use authorities to:

While labs have taken advantage of most of these authorities, we recommended that they find ways to maximize their use. 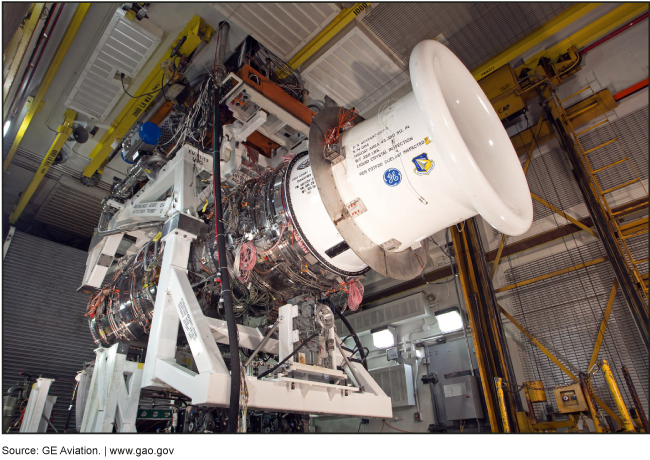 A photograph of an aircraft engine prototype in a test facility.

Congress has provided the Department of Defense's (DOD) research labs with several authorities to enhance management and operations. Four authorities that GAO examined provide lab directors with greater ability to make their own decisions regarding the funding of projects, hiring, lab management, and purchasing of equipment or services.

1. Laboratory initiated research authority. This authority, as implemented, provides labs with a means to fund new science and technology projects that they consider a priority. Labs may use a percentage of all funds available to the lab and are permitted to charge customers of the lab a percentage fee of the costs for activities performed by the lab for the customer.

2.  Direct hire authority. This authority enables labs to compete with private industry for high-quality talent. For example, it provides for streamlined hiring of applicants with relevant advanced degrees, or students enrolled in science, technology, engineering, and mathematics programs.

3. Laboratory enhancement pilot program authority. This authority generally allows lab directors to propose alternative methods that might lead to more effective lab management, and waive certain policies or procedures that might affect implementation of these methods.

4. Micro-purchase authority. This authority raises the threshold for small purchases for DOD research lab activities from $3,500 to $10,000 to facilitate acquisitions.

While labs have used these authorities, their use has sometimes been limited, particularly with the laboratory initiated research authority. DOD lab directors at Air Force, Navy, and Army cited several obstacles that impede wider use of that authority, specifically:

Air Force: Financial management officials at the Air Force stated that the service's accounting system does not currently have an automated capability to transfer the allowable percentage fee of costs to a central account at the Air Force Research Laboratory. This lack of capability, officials noted, creates a significant administrative burden related to charging these fees.

Navy: In fiscal year 2017, Navy labs invested $7.3 million in lab infrastructure projects, compared to $32.9 million and $53.7 million at the Air Force and Army, respectively. Navy lab officials told us that they were restricted in their use of infrastructure funds available under the laboratory initiated research authority due to a lack of clear guidance as to whether and how to use this authority within the Capital Investment Program of the Navy Working Capital Fund.

Army: The Army requires its labs to use a similar percentage of funds from two sources: (1) what it refers to as directly appropriated funds and (2) funds labs charge for customer activities. Some Army lab directors reported assessing a lower rate on customer funds than allowed so as not to drive customers away. The labs then generally charge a lower than desired rate on their directly appropriated funds, which further constrains the total funding available to them.

Senate report 114-255 contained a provision for GAO to study governance models used by federal labs. This report evaluates DOD labs' use of authorities to foster innovation and efficiency.

GAO selected four authorities that recent work on best practices for science and technology management and expedited defense lab hiring have shown to be the most crucial for supporting innovation; administered a survey to 44 lab directors to gain insight into their use of the authorities; interviewed key lab officials and contractors; and reviewed relevant policies and guidance.

GAO is making three recommendations to enhance DOD's use of laboratory initiated research authority, including that the Air Force assess potential accounting system improvements, the Navy clarify how labs can use the authority for infrastructure improvements, and the Army assess its policy to determine whether changes are needed to remove disincentives for labs to use the authority. DOD concurred with the recommendations.