While the biotechnology revolution presents opportunities for scientific breakthroughs, in the wrong hands these technologies could help create biological weapons with catastrophic impacts.

How do we defend against these and other biological threats, including naturally-occurring diseases?

We testified before a House committee on our work on the nation's long-standing biodefense challenges. We identified key challenges in the nation's ability to detect and respond to biological events that transcend what a single agency can address. For example, agencies need to work together to assess the relative risk from a variety of biological threats. 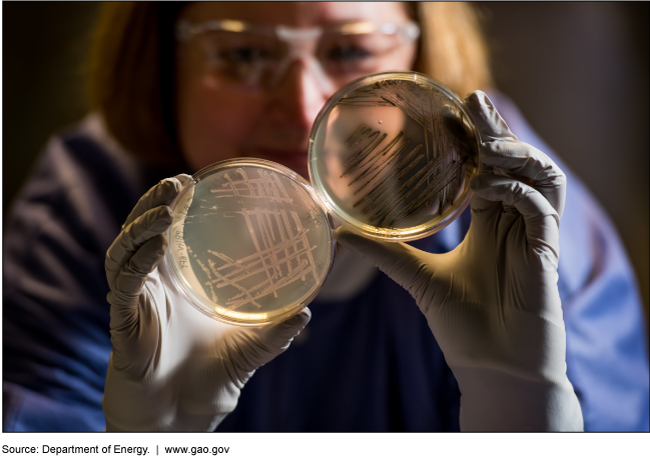 GAO's past work has identified a number of challenges related to the nation's ability to detect and respond to biological events that transcend what any one federal department or agency can address on its own. They include, among others:

In September 2018, the White House issued the National Biodefense Strategy and associated plans, which could help to address some of the ongoing challenges GAO has previously identified. However, because implementation of the strategy is in early stages, it remains to be seen how or to what extent the agencies responsible for implementation will institutionalize mechanisms to help the nation make the best use of limited biodefense resources. GAO is currently reviewing the strategy and will report out later this year.

Catastrophic biological events have the potential to cause loss of life, and sustained damage to the economy, societal stability, and global security. The biodefense enterprise is the whole combination of systems at every level of government and the private sector that contribute to protecting the nation and its citizens from potentially catastrophic effects of a biological event. Since 2009, GAO has identified cross-cutting issues in federal leadership, coordination, and collaboration that arise from working across the complex interagency, intergovernmental, and intersectoral biodefense enterprise. In 2011, GAO reported that there was no broad, integrated national strategy that encompassed all stakeholders with biodefense responsibilities and called for the development of a national biodefense strategy. In September 2018, the White House released a National Biodefense Strategy.

GAO has made numerous agency recommendations in its prior reports designed to address the challenges discussed in this statement. As of June 2019, agencies have taken steps to address many of these, and GAO is monitoring ongoing efforts.