Competition among companies for federal information technology contracts is critical to achieving the best return on investment for taxpayers. However, noncompetitive contracts—including bridge contracts—are also allowed under certain circumstances.

Federal data estimates 30% of IT spending is noncompetitive—or about $15 billion annually. However, this estimate may not be accurate. We found some agencies misreported whether certain orders were competitive or noncompetitive. This calls the federal estimate into question.

We recommended that selected agencies identify the reason for these errors and correct the problem. 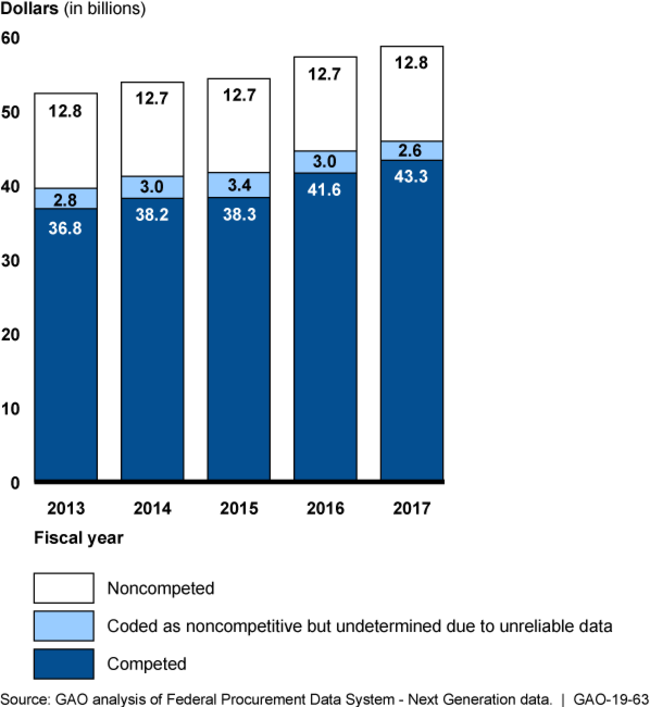 From fiscal years 2013 through 2017, federal agencies reported obligating more than $15 billion per year, or about 30 percent, of information technology (IT) contract spending on a noncompetitive basis (see figure).

GAO found, however, that Departments of Defense (DOD), Homeland Security (DHS), and Health and Human Services (HHS) contracting officials misreported competition data in the Federal Procurement Data System-Next Generation (FPDS-NG) for 22 of the 41 orders GAO reviewed. GAO's findings call into question competition data associated with nearly $3 billion in annual obligations for IT-related orders. DHS identified underlying issues resulting in the errors for its orders and took corrective action. DOD and HHS, however, had limited insight into why the errors occurred. Without identifying the issues contributing to the errors, DOD and HHS are unable to take action to ensure that competition data are accurately recorded in the future, and are at risk of using inaccurate information to assess whether they are achieving their competition objectives.

GAO found that DOD, DHS, and HHS primarily cited two reasons for awarding a noncompetitive contract or order: (1) only one source could meet the need (for example, the contractor owned proprietary technical or data rights) or (2) the agency awarded the contract to a small business to help meet agency goals.

GAO estimates that about 8 percent of 2016 noncompetitive IT contracts and orders at DOD, DHS, and HHS were bridge contracts, awarded in part because of acquisition planning challenges. GAO previously recommended that the Office of Federal Procurement Policy define bridge contracts and provide guidance on their use, but it has not yet done so. GAO believes that addressing this recommendation will help agencies better manage their use of bridge contracts.

Additionally, GAO estimates that about 7 percent of noncompetitive IT contracts and orders were used to support outdated or obsolete legacy IT systems. Officials from the agencies GAO reviewed stated these systems are needed for their mission or that they are in the process of modernizing the legacy systems or buying new systems.

The federal government spends tens of billions of dollars each year on IT products and services. Competition is a key component to achieving the best return on investment for taxpayers. Federal acquisition regulations allow for noncompetitive contracts in certain circumstances. Some noncompetitive contracts act as “bridge contracts”—which can be a useful tool to avoid a lapse in service but can also increase the risk of the government overpaying. There is currently no government-wide definition of bridge contracts.

GAO recommended DOD and HHS identify the reasons why competition data for certain orders in FPDS-NG were misreported and take corrective action. DOD and HHS concurred.