The Comptroller General testified before Congress about the government’s unsustainable fiscal outlook, the need for a long-term plan to address growing debt, and other aspects of the nation's fiscal health.

For example, public debt as a share of the economy is projected to top its record level within 13 to 20 years. Its continued growth is unsustainable. A plan to put the government on a sustainable path will require changes to both spending and revenues.

This statement is based on our prior work on the High Risk List; the fragmentation, overlap, and duplication annual report; natural disasters and climate change; and other topics. 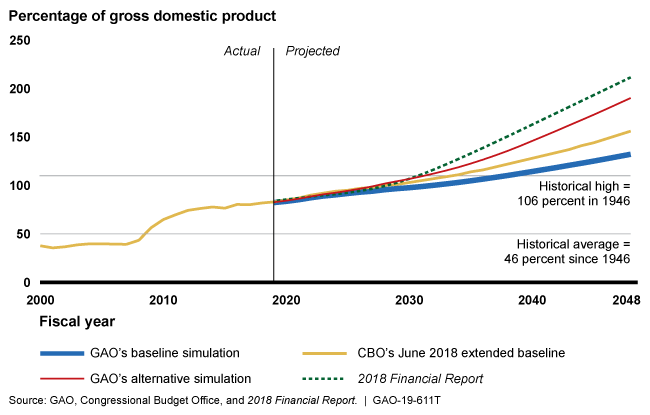 Debt is projected to increase as a share of gross domestic product according to projections by GAO and others.

Congress and the administration face serious economic, security, and social challenges that will require difficult policy choices in the near term in setting national priorities and helping promote economic growth. This will influence the level of federal spending and how the government obtains needed resources.

At the same time, the federal government is highly leveraged in debt by historical norms. For example, debt held by the public as a share of gross domestic product (GDP) at the end of fiscal year 2018 was 78 percent, compared to an average of 46 percent since 1946.

Over the long term, the imbalance between spending and revenue that is built into current law and policy is projected to lead to continued growth of the federal deficit and debt held by the public as a share of GDP.

The Federal Government Is on an Unsustainable Long-Term Fiscal Path

Debt held by the public was $15.8 trillion—or 78 percent of GDP—at the end of fiscal year 2018. It is projected to surpass its historical high of 106 percent within 13 to 20 years, and climb between about 250 to 500 percent by 2092, according to projections by GAO and others (see figure). Absent policy changes, the current federal fiscal path is unsustainable. 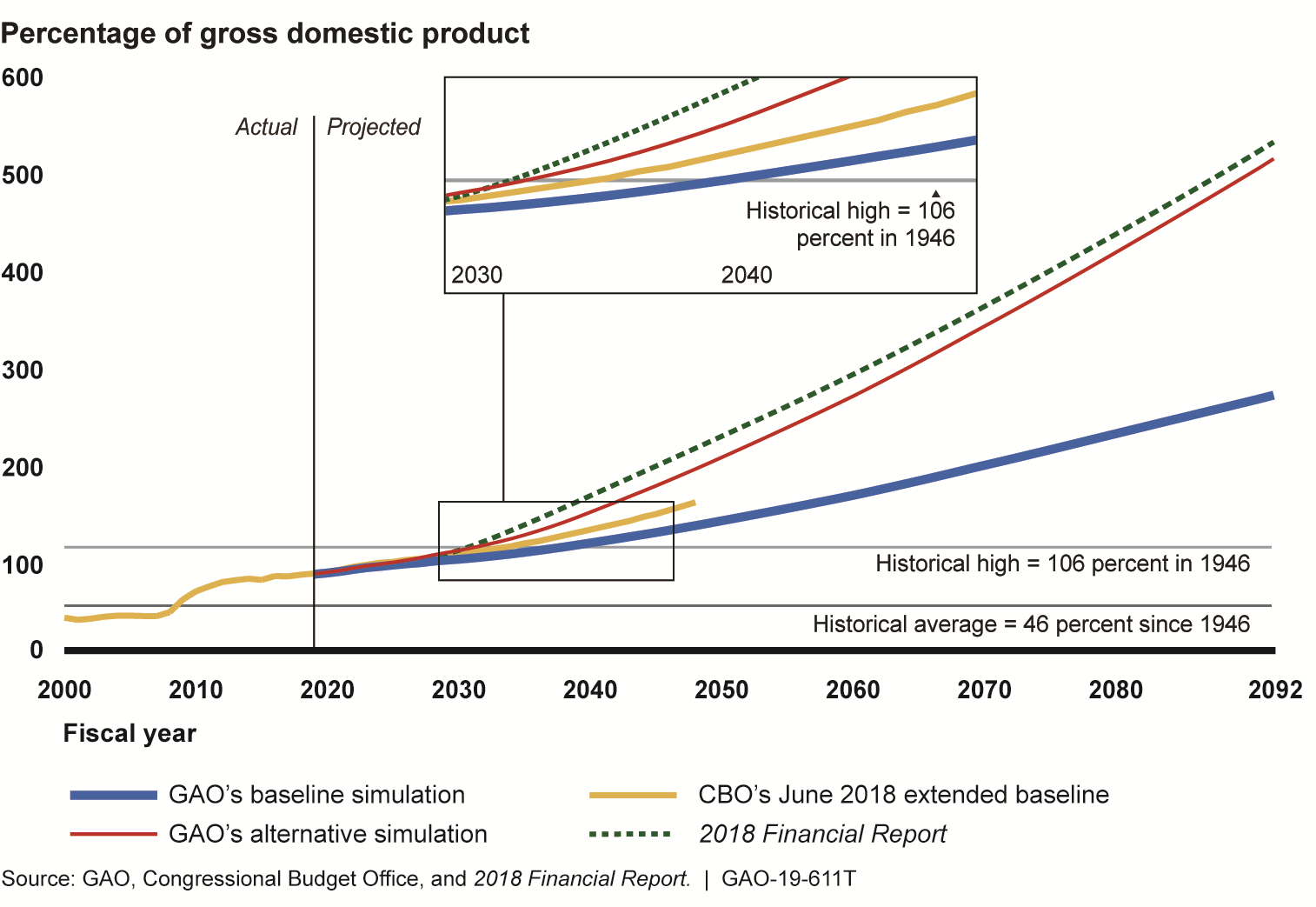 In the long-term, the key drivers of growing federal spending are health care programs (due to the aging population and per beneficiary spending) and net interest. Net interest is projected to eventually become the largest category of federal spending, surpassing:

In 2092, according to GAO’s alternative simulation, net interest is projected to account for about 40 percent of federal spending, compared to 8 percent in fiscal year 2018.

The federal budget is further strained by fiscal pressures, including known financial challenges for key programs (as shown below), and risks like natural disasters that could lead to unknown amounts of future spending. The longer action is delayed, the more drastic the changes will have to be.

aCBO did not report defense spending projections separately from total discretionary spending in its long-term projections after 2029.

In addition, GAO has identified numerous opportunities for Congress and executive branch agencies to take steps in the near term that could improve the federal government’s fiscal condition. These opportunities include addressing billions of dollars in improper payments and the over $400 billion annual tax gap, evaluating the significant amount of revenue forgone through tax expenditures, as well as implementing GAO recommendations for defense operations. These actions would improve stewardship over federal resources in the near term. However, these actions alone cannot put the federal government on a sustainable fiscal path.

A Long-Term Plan Is Needed to Achieve Fiscal Sustainability

To address the growing federal debt and put the government on a more sustainable fiscal path, policymakers will need to consider a long-term plan that addresses the entire range of federal activities including both revenue and spending. A long-term fiscal plan could include fiscal rules and targets that promote fiscal sustainability by imposing numerical guidelines on the budget (known as targets).

Types of fiscal rules include:

Fiscal rules have been used by the United States and other countries to help promote fiscal sustainability. For example, the European Union’s stability and growth pact combines different rules, which are designed to ensure that countries in the European Union pursue sound public finances and coordinate their fiscal policies.

Rules can be designed to balance flexibility and enforceability. For example:

It will be important that any future U.S. fiscal rules target the right factors, enforce budget agreements, and limit exemptions. A fiscal target that sets a common goal to control the debt, and well-designed rules that form a path to achieve that target, could form part of a long-term plan for fiscal sustainability.

Unlike fiscal rules, the current approach used to set the U.S. government debt limit is not a control on debt but rather an after-the-fact measure that restricts authority to borrow. It does not restrict Congress and the President’s ability to enact spending and revenue legislation that affects the level of debt. Failure to increase or suspend the debt limit in a timely manner disrupts the market for Treasury securities and can increase borrowing costs. Congress should consider alternative approaches to the debt limit as part of a long-term fiscal plan. GAO has recommended possible alternatives such as linking action on the debt limit to the budget resolution.