USAID has undertaken a number of projects to reform its organizational structure, workforce, and programs—with the ultimate goal of helping partner countries become more self-reliant.

We found USAID generally addressed 9 of the 11 key practices necessary for successful agency reforms, but only partially addressed 2 others. For example, USAID solicited input from employees through briefings and town halls. But it hasn’t identified outcome-oriented performance measures for all its projects. It also hasn’t completed a strategic workforce plan to ensure that it can meet the agency’s future staff needs. We recommended that it do so. 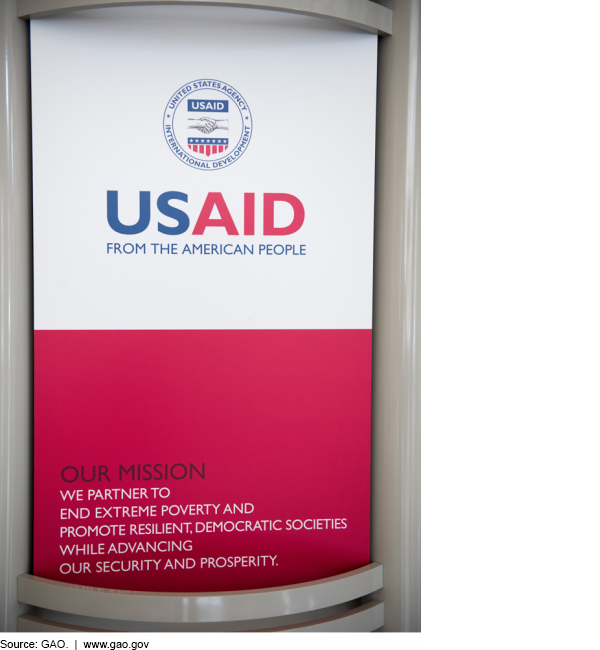 The reform efforts of the U.S. Agency for International Development (USAID) consist of a total of 32 reform projects—31 projects being implemented by USAID's Transformation Task Team and an additional Human Resources Transformation project that predates the 31 projects. As of July 2019, USAID has completed 19 reform projects and is implementing 12 additional projects, which it intends to complete by mid-2021. The task team has one additional project in the planning phase.

In planning and implementing these efforts, USAID has generally addressed nine of 11 key practices for organizational transformation and partially addressed two. For example, USAID generally addressed the key practice of involving employees and key stakeholders such as the Department of State and Congress through a variety of mechanisms, such as briefings and town halls. USAID also used data and evidence to guide its reform efforts by integrating employee and external input into its reform plans. Morever, USAID addressed fragmentation, overlap, and duplication by planning a restructuring effort to streamline operations and achieve efficiencies. Further, it generally addressed leadership focus and attention by designating a reform coordinator and establishing a dedicated team responsible for managing and planning USAID's reform efforts.

However, while USAID established goals for its reform efforts, it established outcome-oriented performance measures for only four of its 32 projects. Establishing such measures would improve its ability to assess the results of the changes it is making. In addition, while USAID is developing a strategic workforce plan, it has yet to develop the tools needed to identify and meet staffing needs arising from the reforms in order to fully assess its workforce. Completing a strategic workforce plan with these tools could help USAID ensure it has the workforce needed to meet existing and emergent program demands. Addressing these gaps could help USAID make long-term improvements in its efficiency and effectiveness.

• = Generally addressed: USAID addressed a practice without significant gaps in its coverage of the actions associated with this key practice.

⊙ = Partially addressed: USAID addressed a practice with significant gaps in its coverage of the actions associated with this key practice.

In March 2017, the President issued an executive order to federal agencies intended to improve the efficiency, effectiveness, and accountability of the executive branch. The order required the Director of the Office of Management and Budget (OMB) to develop a plan to reorganize and streamline the government. In April 2017, OMB issued additional guidance to agencies on implementing the order. In response, USAID launched several efforts to reform its organizational structure, workforce, programs, and processes with the ultimate goal of ending the need for foreign assistance by helping partner countries become more self-reliant. GAO's prior work has shown that successful agency reforms depend on following key practices for organizational transformation, such as establishing goals and outcomes and involving key stakeholders.

This report examines (1) the status of USAID's reform efforts and (2) the extent to which USAID has addressed key practices in planning and implementing those efforts. GAO reviewed USAID reform plans, proposals, and related documents and met with officials involved in its reform efforts. GAO also assessed USAID's planning and implementation of its reform efforts against 11 key practices identified in GAO's June 2018 report, Government Reorganization: Key Questions to Assess Agency Reform Efforts (GAO-18-427).

USAID should (1) establish outcome-oriented performance measures to assess the effectiveness of its reform efforts and (2) complete a strategic workforce plan necessary to support its reform efforts. USAID concurred with the recommendations.