The Bureau appears to be on track to carry out its plans, which include leasing 248 local offices. So far it is exceeding its recruiting goals, but faces challenges such as finding partnership specialists to hire in a time of low unemployment. It could also do a better job evaluating its new training approach.

We recommended the Bureau add goals and performance measures to better evaluate training. 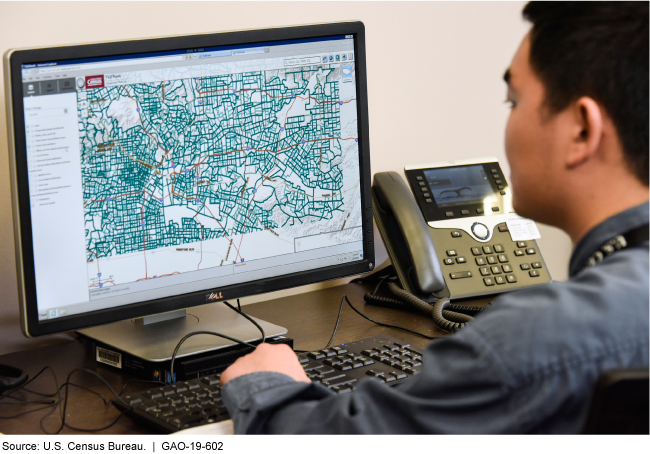 A person at a computer with a map on the monitor

To help control the cost of the 2020 Census while maintaining accuracy, the Census Bureau (Bureau) is making significant changes in three areas—office space, recruiting and hiring, and training—compared to prior decennials. The Bureau is reducing its use of office space, hiring fewer census field staff, and adopting a blended training approach of instructor-led, computer-based, and hands-on training (see figure). 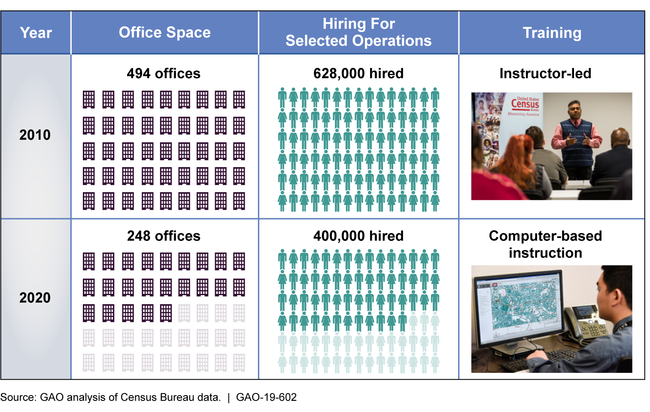 GAO found that the the Bureau generally appears to be positioned to carry out these activities as planned, if implemented properly.

Opening offices. While the Bureau experienced early delays when regions were trying to find office space and acquire leases, Bureau officials said that the deadlines for the later phases of renovations will allow them to make up time lost. As of June 2019, there were signed leases for 247 of 248 offices.

The decennial census is a crucial, constitutionally mandated activity with immutable deadlines. To meet these statutory deadlines, the Bureau carries out thousands of activities that need to be successfully completed on schedule for an accurate, cost-effective head count. These activities include opening area census offices, recruiting and hiring a large temporary workforce, and training that workforce.

GAO was asked to review the Bureau's plans for critical logistical support activities. This report (1) assesses the Bureau's progress in opening area census offices; (2) determines the extent to which the Bureau is following its field hiring and recruiting strategy for the 2020 Census; and (3) determines the extent to which the Bureau has followed its plans for training field staff, and whether this training approach is consistent with selected leading practices.

To assess the extent to which the Bureau is following its plans for opening area census offices, recruiting and hiring, and training, GAO reviewed current Bureau planning documents and schedules, and interviewed Bureau officials, including officials at the Bureau's six regional offices. GAO used its guide to training (GAO-04-546G) as criteria for selected leading practices.

The Secretary of Commerce should direct the U.S. Census Bureau to revise plans to include goals and performance measures for evaluating its new training approach. The Department of Commerce agreed with GAO's recommendation.