The catastrophic destruction caused by Hurricanes Irma and Maria overwhelmed the U.S. Virgin Islands and Puerto Rican governments and resulted in a large federal disaster response.

The Department of Health and Human Services led federal public health and medical services efforts. Among other things, it provided medical personnel and facilities and evacuated critical care and dialysis patients.

We identified shortcomings in HHS’s efforts, such as insufficient staffing at emergency operations centers that contributed to confusion over the status of evacuated patients. We made 7 recommendations, including that HHS ensure adequate staffing. 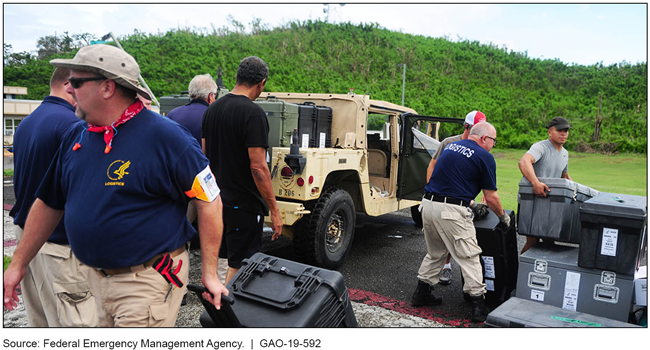 A team of people organizing boxes of supplies

The catastrophic destruction encountered as a result of Hurricanes Irma and Maria proved overwhelming to the U.S. Virgin Islands and Puerto Rican governments and resulted in a large federal disaster response, complicated by losses of power, communication, and health care infrastructure. The Department of Health and Human Services (HHS) led the federal public health and medical services response and undertook numerous actions to address the needs in the territories—including evacuating critical care and dialysis patients from the U.S. Virgin Islands and Puerto Rico and providing medical personnel and facilities.

However, GAO identified several shortcomings in HHS's leadership. While the scale, location, and timing of these storms complicated response efforts, the deficiencies GAO identified were in many cases a function of preparedness policies, or lack thereof. As a result, they could adversely affect future large-scale responses unless addressed. For example, as the lead agency, HHS is responsible for ensuring that appropriate planning activities are undertaken, including monitoring the federal ability to provide core public health and medical services response capabilities. However, GAO found that

HHS did not have a full understanding of the capabilities and limitations of its support agencies, including the Departments of Defense, Homeland Security, and Veterans Affairs. Consequently, HHS's needs were not always aligned with the resources that its support agencies could provide, resulting in some deployed resources not being properly and efficiently utilized. For example, HHS requested Department of Defense medical teams, but these teams specialized in trauma and surgical care, not the chronic and primary care needed.

HHS lacked plans for the territories that accounted for the chronic and primary care needs in isolated communities. This care was greatly needed, given that many, especially the elderly, could not easily access hospitals. 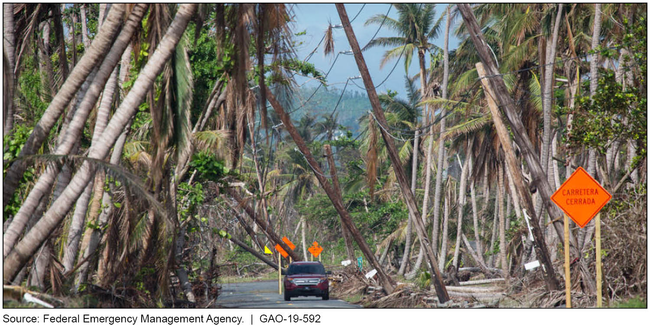 Hurricanes Irma and Maria hit the U.S. Virgin Islands and Puerto Rico within two weeks of each other in September 2017, causing catastrophic damage. HHS is responsible for leading the federal public health and medical services response during a disaster, such as these hurricanes. As part of its lead federal role during these hurricanes, HHS called upon support agencies, including the Departments of Defense, Homeland Security, and Veterans Affairs, to assist with the public health and medical services response.

GAO was asked to review the federal public health and medical services response to Hurricanes Irma and Maria in the U.S. Virgin Islands and Puerto Rico. This report examines HHS's actions and leadership of this response, among other things. GAO reviewed documentation on the preparedness for, and response to, the hurricanes. It also interviewed federal and territory officials and interviewed or received written responses from eight nonfederal stakeholders involved in the response, such as nongovernmental organizations. GAO identified these stakeholders through research and referrals.

GAO is making seven recommendations, including that HHS develop agreements with support agencies that include response capability and limitation information, and develop response plans for providing care in isolated communities. HHS disagreed with two of the seven citing, among other things, territory responsibility for plans. GAO clarified the intent of the two recommendations and believes that all seven are warranted.