According to IRS estimates, taxpayers collectively pay about 82% of the taxes they owe. This difference between what taxpayers owe and what they pay voluntarily and on time is known as the tax gap, which IRS estimated averaged $458 billion a year for 2008-2010.

We testified that key factors contributing to the gap include tax code complexity and declining IRS budgets. We also testified about multiple strategies that could help reduce the gap. For example, requiring more corporations to file their taxes electronically could help the IRS better identify noncompliant taxpayers. 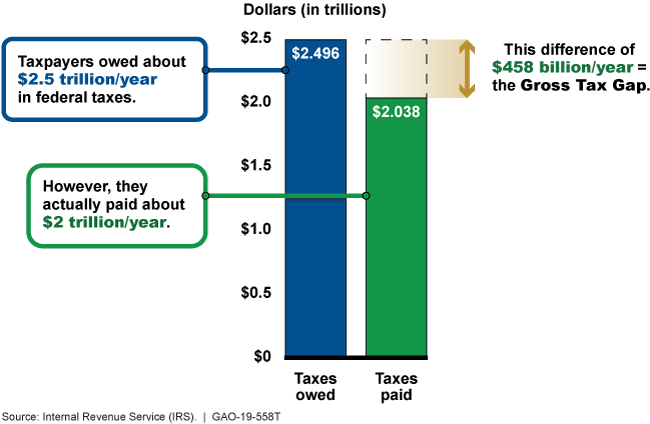 The graphic shows that taxpayers owed about $2.5 trillion a year and paid just over $2 trillion. 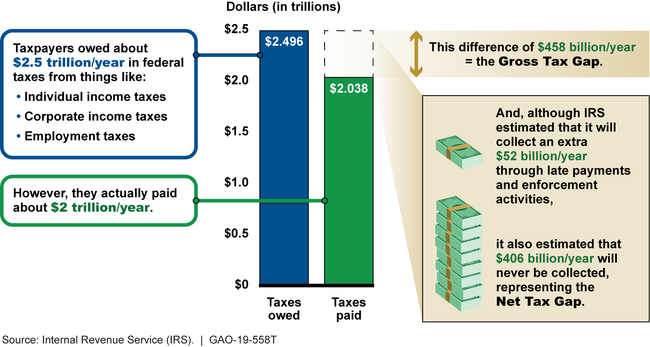 GAO's work has found that three important factors contribute to the tax gap.

Limited third party information reporting. The extent to which individual taxpayers accurately report their income is closely aligned with whether third parties (e.g., employers) report income (e.g., wages) to them and to IRS.

IRS resource tradeoffs. IRS's budget and staffing levels have fallen over the past decade, and IRS faces increasing responsibilities, such as implementing Public Law 115-97—commonly known as the Tax Cuts and Jobs Act—which involved significant changes to tax law.

GAO's work has demonstrated that no single approach will fully and cost-effectively address noncompliance since the problem has multiple causes and spans different types of taxes and taxpayers. In light of these challenges, GAO has made numerous recommendations to IRS—some of which have not yet been implemented—such as developing and documenting a strategy that outlines how IRS will use data to update compliance approaches to help address the tax gap. Reducing the tax gap will also require targeted legislative actions. For example, expanding third-party information reporting could increase voluntary compliance and providing IRS with the authority to regulate paid tax return preparers could improve the accuracy of the tax returns they prepare.

The tax gap—the difference between tax amounts that taxpayers should have paid and what they actually paid voluntarily and on time—has been a persistent problem for decades. The tax gap estimate is an aggregate estimate of the five types of taxes that IRS administers—individual income, corporation income, employment, estate, and excise taxes. For each tax type, IRS attempts to estimate the tax gap based on three types of noncompliance: (1) underreporting of tax liabilities on timely filed tax returns; (2) underpayment of taxes due from timely filed returns; and (3) nonfiling, when a taxpayer fails to file a required tax return on time or altogether.

Enforcement of tax laws has been on GAO's High Risk List since its inception in 1990, and GAO has made various recommendations to IRS and suggestions to Congress to reduce the tax gap that have resulted in improvements. For example, GAO recommended that IRS consider comparing individuals' tax returns with the information educational institutions report to verify taxpayers' education tax benefits claims and suggested that Congress require brokers to report to both taxpayers and IRS the adjusted cost of the securities sold by taxpayers. These actions resulted in billions of dollars in additional revenue.