The Post-9/11 GI Bill pays tuition, housing, and other costs for veterans pursuing higher education. It has provided $94 billion in benefits to veterans since 2009.

This testimony examines which schools are receiving the most Post-9/11 GI Bill tuition payments, how their students are faring, and how school closures affect veterans.

Within those 50, graduation rates varied from 73% at public schools to 22% at for-profits 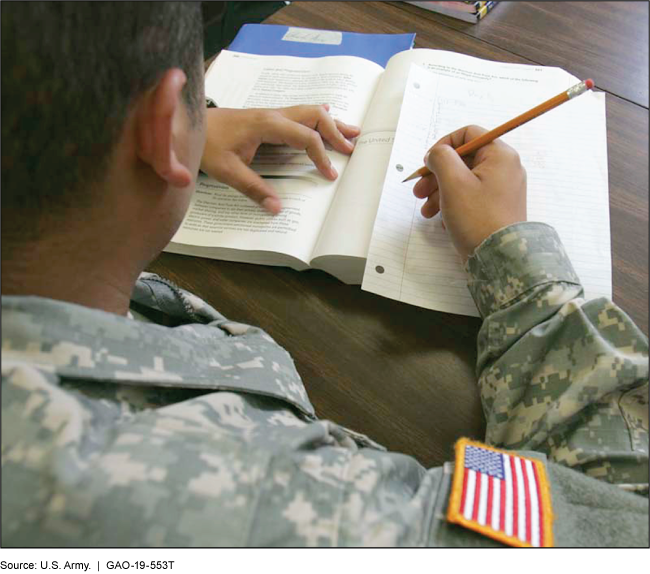 Photo of a veteran writing notes in a book.

The average student outcomes at the 50 schools that received the highest total amount of Post-9/11 GI Bill tuition and fee payments in fiscal year 2017 were generally comparable to the national averages, but varied widely when examined by school sector. For example, the average 4-year program graduation rate for the top 50 schools was the same as the national average (61 percent). Within the top 50 schools, average graduation rates varied between public (73 percent), nonprofit (66 percent) and for-profit schools (22 percent).

Although a relatively small number of schools close each year, these closures can affect thousands of student veterans. School closures, which have increased in recent years, are particularly harmful when they involve large schools that close abruptly with little or no advance warning. For example, more than 7,000 veterans receiving Post-9/11 GI Bill benefits were attending schools operated by Corinthian Colleges and ITT Educational Services when they abruptly closed in 2015 and 2016, respectively. Although veterans affected by school closures may qualify to have their GI Bill benefits restored, these closures can create hardships for veterans and significant costs for taxpayers. For example, veterans can face challenges transferring credits and continuing their education at a new school. This may make it more difficult for veterans to complete their degrees before exhausting their eligibility for Post-9/11 GI Bill benefits. School closures also pose a financial risk for the government and taxpayers due to the costs associated with restoring benefits.

The Post-9/11 GI Bill is VA's largest educational program. It provides payments for eligible veterans to cover tuition and fees, housing and other costs while they pursue a higher education. However, for some veterans this pursuit is interrupted when the school they attend unexpectedly closes.

This testimony addresses (1) the distribution of Post-9/11 GI Bill tuition and fee payments among schools, (2) outcomes of students at schools that receive the most Post-9/11 GI Bill payments, and (3) how school closures can affect student veterans.