One way to award a competitive federal contract is to choose based on cost, when the cheapest option will suffice. But how does DOD decide when that's the case?

While there are some general criteria for using this process, DOD's regulations don't provide specific criteria for making determinations. That will change when DOD updates its regulations as directed by a 2016 law.

We found that some contracting officers were confused about how to apply 2 of the 8 criteria in the law, including how to assess the full cost to DOD over the life of the good or service being bought.

We recommended providing more guidance on the criteria. 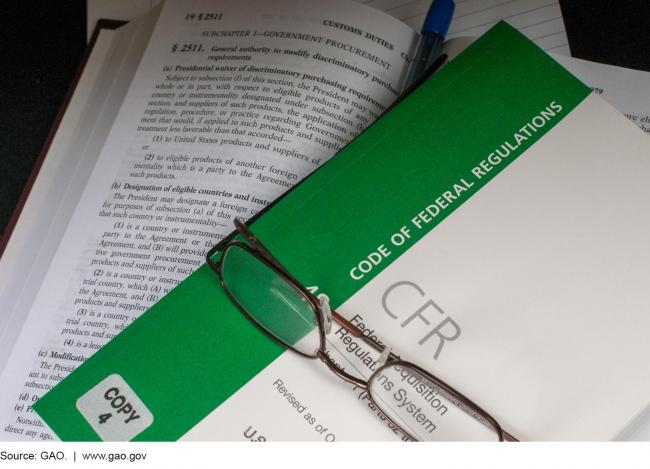 A photo of the Code of Federal Regulations and a pair of reading glasses.

GAO estimates that about 26 percent of the Department of Defense's (DOD) contracts and orders valued $5 million and above in fiscal year 2017 were competitively awarded using the lowest price technically acceptable (LPTA) process. DOD used the LPTA process to buy such things as equipment, fuel, information technology services and construction services.

Section 813 of the National Defense Authorization Act for Fiscal Year 2017, as amended, mandated that DOD revise its regulations to require that eight criteria be considered when using the LPTA process. As of September 2018, DOD had not yet done so. Accordingly, a DOD acquisition policy official stated that contracting officers are not yet required to consider these criteria. Nevertheless, GAO found that contracting officials generally considered five of the eight criteria for the 14 contracts and orders GAO reviewed (see table).

When awarding a contract competitively, DOD may use the LPTA process, under which the lowest price is the determining factor when selecting an offer. Section 813, as amended, contained a provision for GAO to submit four annual reports on DOD's use of the LPTA process for contracts exceeding $5 million as well as how contracting officials considered eight specific criteria. GAO issued its first report in response to this provision in November 2017.

This second report, among other things, assesses the extent to which (1) DOD used the LPTA process in fiscal year 2017 and (2) contracting officials considered Section 813 criteria when using the LPTA process.

GAO recommends that DOD address, as regulations are updated, how contracting officials should apply two Section 813 criteria that were generally not considered. DOD concurred with the recommendations and plans to revise its regulations and issue additional guidance by the end of fiscal year 2019.